The following case summaries for matters involving an outstanding bench warrant are offered merely as a summary of what did occur in a prior case.
While they do have some predictive value toward what another judge may do, no two cases are exactly the same and other factors such as: 1) the judge’s demeanor; 2) the reason for the bench warrant being issued at all; 3) the prosecutor’s opinions about the case, including whether a deal reached was particularly generous to defendant; 4) how the client appears in court (well dressed, well groomed) or is brought to court through an arrest; 5) the rapport our office had with the judge and/or prosecutor; 6) how long the bench warrant was outstanding; 7) what the bail amount is on the bench warrant, if any bail is set; 8) the reason the client offers for the failure to appear in court; and 9) the client’s criminal history (especially including whether the client has had any prior bench warrants and when) are just some of the factors that cannot be quantified and will vary by case. 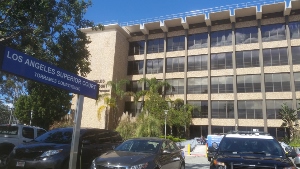 Torrance Superior Courthouse
Consequently, we recommend that no particular case summary be construed as a guarantee or predictor of how your bench warrant may be handled, if you face a bench warrant.  In one case where one was reinstated on probation with no extra punishment, another case with seemingly the same facts may result in prison time being imposed.
We further recommend that if a defendant knows why a bench warrant was issued, that the defendant appear in court, either personally or through counsel (when allowed), with “presents” for the judge, i.e. payment of an overdue court fine, proof of completion of community service, proof of payment of a booking fee, or anything else that shows the client is serious about really completing the terms of probation.
In addition, if there is a genuine, valid excuse for why the client was unable to appear in court, it is wise to bring documentation of the hospital records, the funeral pamphlet, etc., to show the failure to appear was not willful.
If you want to read about our bench warrant recall cases, please click on the links below to go to a list of detailed cases.
Contact us.
Serving Torrance, Long Beach, Compton, Airport Courthouses and Other Courthouses.