Torrance, Possession of Meth for Sales; Plea to Possession

Our client, in 2002, was stopped in Inglewood for making an unsafe lane change.  Police knew our client by sight and so the traffic stop was suspicious, but our client got out of the car.  He was twenty years old and had already served time for two residential burglaries as a juvenile.

Police did not ask for consent to search the inside of his car and instead started opening up his backpack sitting in the front seat.  Police found over $400 and eight or nine small bags of crystal meth.  They twirled around our client, all 120 pounds of him, and slapped on the handcuffs.

In a Nutshell:  Client arrested in Inglewood in 2002 for possession of meth for sales.  The plea bargain offered by the DA was six years in state prison due to his two prior convictions for residential burglary.  Client then flees to Las Vegas for 16 years.  Bench warrant recalled in 2018 by our office and case reduced to misdemeanor for simple possession, no jail and 160 hours of community service.

Off he went to the Inglewood police station, where he had been many times before.  He was held on $30,000 bond for violating Health and Safety Code § 11378, possession of methamphetamine for purposes of sale.

The client’s friends cobbled together bail and had him released.  He then hired a private attorney and fought the case based on an improper traffic stop and then an illegal search and seizure, in violation of the Fourth Amendment.

The case started in the Inglewood Superior Court and stalled out with seven appearances (hearings) before finally proceeding to the preliminary hearing, where the motion to suppress was heard and denied. 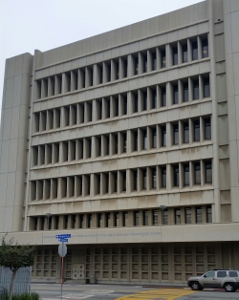 Inglewood Superior Courthouse
The offer at that time was six years in state prison, which our client refused to accept.  The case was then transferred to the Torrance Superior Court for trial.

The client retained the same private attorney for services up to trial, but after four court appearances in Torrance, he fled to Las Vegas and a bench warrant was issued for his arrest.  At the time, his girlfriend had just given birth to his son and he did not want to leave the son for six years and miss so much of his life.

Fast forward sixteen years to 2018 and our client was still aware of the outstanding warrant.  He had become a successful agent for several rap singers and other actors who lived in Los Angeles, but he felt vulnerable coming to Los Angeles to meet with them.

The client therefore contacted Greg Hill & Associates and asked what Greg could do.  Greg explained that due to the passage of sixteen years, the arresting officer may have passed away, retired or otherwise become unavailable to testify at trial.  The evidence also may have been lost and the preliminary hearing transcript may not have laid a sufficient record on many elements of the case.  Due to these things, the prosecution could be unable to proceed (UTP) for trial.

However, Greg also cautioned that the arresting officer may be available, all the evidence preserved and the record sufficient for the case to proceed, especially since the motion to suppress was litigated at the preliminary hearing.

Regardless, Greg agreed to appear with the client and have the bench warrant recalled and then plea bargain with the assigned prosecutor.
Greg planned to request that the prosecutor amend the information to allege simple possession, which due to Prop 47, would be a misdemeanor.
The client agreed to accept a plea to a misdemeanor, especially if no jail time was required as part of the disposition.

Greg and the client then did appear in the Torrance Courthouse and the judge did recall the bench warrant, although our client was required to repost the $30,000 bond.

Greg then negotiated with the handling prosecutor, who surprisingly had a complete file and reported no evidence was lost and the arresting officer remained employed with the Inglewood Police Department (unfortunately).

However, the handling prosecutor agreed to amend the information to allege simple possession for personal use (Health and Safety Code § 11377), with a plea bargain that included three years of summary probation and 160 hours of community service.  Our client was ecstatic with this resolution and happily agreed, relieved that he no longer faced a day in custody instead of the six years he previously faced.
For more information about drug offenses, please click on the following articles:
Contact us.
Serving Torrance, Long Beach, Compton, Airport Courthouses and Other Courthouses.