We are Greg Hill & Associates. If you or a family member want to  learn more about certificates of rehabilitations, we can help you.

The signed certificate of rehabilitation also serves as an official document to demonstrate a person’s rehabilitation, which could enhance employment opportunities.  It allows an ex-felon to serve on a jury and allows certain ex-felons to be considered for appointment as a county probation officer or state parole agent.
A certificate of rehabilitation does not erase the felony conviction or seal the criminal record (Penal Code § 4852.17).  It also does not prevent a prosecutor from considering the offense at issue as a prior conviction if the person is later convicted of another offense.  It also does not allow, like expungement does in general, to a person to answer “no” on an employment application asking if he or she has a criminal record.  It also does not restore the right to vote.
What exactly is a certificate of rehabilitation?  It is a judge’s finding (a certification) that someone has become an honest and upstanding member of community, who obeys all laws, but who previously was: 1) convicted of a felony, sentenced to state prison and served time in state prison or county jail under AB109; or 2) someone who was convicted of a felony, but had the conviction expunged, or 3) someone who was convicted of a misdemeanor sex offense requiring registration under Penal Code § 290 and the conviction was expunged. 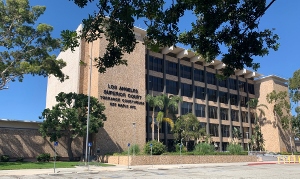 Torrance Superior Courthouse
Not everyone is eligible for a certificate of rehabilitation.  One cannot be on probation or parole when applying and depending upon the conviction, one must present satisfactory evidence of residence in California for five years plus additional time for certain offenses (i.e. four more years for murder, aggravated kidnapping, train wrecking, assault likely to cause great bodily injury, acts involving explosive devices, or other offenses involving a life sentence and certain child pornography crimes, as well as certain indecent exposure crimes).
However, one is not eligible for a certificate of rehabilitation if one is in the military or on mandatory life parole.  Also someone is ineligible if he or she went back to prison after the conviction at issue.  Other crimes that are ineligible for a certificate of rehabilitation are:
In Los Angeles County, all such applications are filed in the downtown Clara Shortridge Foltz (CCB) courthouse, not the courthouse within Los Angeles County where the conviction took place (unless it was CCB).

If you or a family member would like to learn more about certificates of rehabilitation, please call us today for a free 45 minute consultation. You will receive top quality representation for a reasonable fee. (310) 782-2500.