Our client, in 2010, had been cited and released (without being arrested) for shoplifting by the Torrance Police Department.  The police had made contact with him because loss prevention at the Urban Outfitters in the Torrance Del Amo Mall caught our client walking out of the store with a bag of clothing he had not paid for.
In the bag were three basic t-shirts worth $14 each, a sweater selling for $68 and a pair of Nike shoes selling for $100.  The total value was $188.  Our client was embarrassed.  It was his first offense.
The case was filed in the Torrance Superior Court and our client, then 23, “went with” the public defender, who resolved the case with a delayed entry of judgment (DEJ) deal wherein our client would have the misdemeanor charge of violating Penal Code § 484(a) (“petty theft”) reduced to an infraction-level charge of violating Penal Code § 415(2) (“disturbing the peace”) if he paid court fees of $300 plus penalties and assessments of $1,390 or performed 27 hours of approved community service and paid a court fine of $220.  He also had to pay the City of Torrance booking fee of $353.  He had one year to do pay these fees and/or opt for the community service, perform it, and pay lower fees. 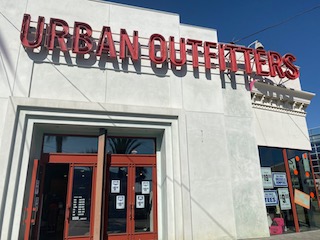 Urban Outfitters
The client did nothing toward “earning an infraction” in the deal worked out for his by his public defender.  Instead, he moved to Atlanta and forgot about the case.
The judge in Torrance overseeing the case issued a bench warrant at the one-year mark when our client failed to appear for the proof of completion of the community service and/or payment of the fines and the booking fee.  The conviction for violating Penal Code § 484(a) as a misdemeanor was also entered and he was placed on three years of informal probation, but the judge then revoked probation and issued the bench warrant, setting bail on it at $50,000.
Nine years later, in 2019, he was applying for a promotion to management at Enterprise Rent-a-Car, where he had been working for the last five years.  The human resources department with Enterprise told he was ineligible for promotion unless he took care of the bench warrant for $50,000 in Torrance, California.
The client immediately called Greg Hill & Associates and asked what, if anything, could be done to remove the bench warrant.  The client spoke with Greg Hill who first and foremost asked why the client thought there would be a bench warrant.  His only response was “I don’t know.  I thought everything was taken care of.”  Greg then got the case number from the client, as HR at Enterprise told him the warrant number. 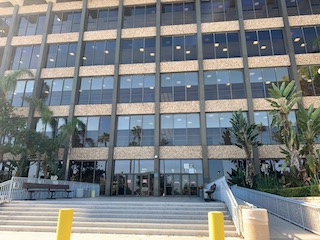 Torrance Courthouse
Greg then went to the Torrance Courthouse and got the docket report for the case so he could untangle what had led to the bench warrant for the client.  Greg then called the client and explained that the judge issued a bench warrant because our client failed to pay the court fines of $300 plus penalties and assessments (total of $1,390) and the booking fee of $353 or perform 27 hours of community service, pay the court costs of $220 and pay the booking fee.  Greg lamented that the client had a deal wherein he could have avoided a misdemeanor conviction for a crime of dishonesty, 484(a), and received an infraction instead for an offense that was not a crime of dishonesty.
To resolve the bench warrant, Greg recommended that the client have Greg appear in the Torrance Court on his behalf (the client would stay in Atlanta) with the $220 for payment of court fees and ask for a re-referral to community service, but ask the judge if he could perform the community service in Atlanta.
The judge did recall the bench warrant when Greg appeared with $220 for court fines.  The judge also reinstated the client on informal probation for the 484(a) conviction and gave the client permission to perform the community service in Atlanta.
Greg shared this news with the client who then performed 30 hours of community service through the Salvation Army in Atlanta and gave Greg $353 to pay his outstanding booking fee.
Greg then returned to court with the client’s proof of completion of community service and a receipt showing he paid the booking fee for the City of Torrance.
Greg then asked the judge to end probation early, after only two months of 36 months of probation, as the client had done everything he was ordered, albeit late, and over nine years had passed and the client had stayed out of trouble for nine years.  The judge granted this request, surprisingly.
Greg then filed a petition for dismissal (expungement) for the client, expunging the conviction for the client.  The client was very happy for all this work, as it helped make him more eligible for the promotion at work.
For more information about expungement issues, please click on the following articles:
Contact us.
Serving Torrance, Long Beach, Compton, Airport Courthouses and Other Courthouses.