Home
Other Information
Criminal Defense Articles
Expungement If One Went to Jail or Prison? What’s 1203.4(a)?

Many attorneys are unaware that Penal Code § 1203.4a (commonly called expungement) allows a defendant convicted of a misdemeanor and not granted probation to withdraw his or her plea of guilty or no contest and enter a plea of not guilty if the judge finds he or she “lived an honest and upright life and has conformed to and obeyed the laws of the land.”  This power of a judge to find this is “in the interest of justice”

About This Article Briefly:  As the Second Appellate District quipped in ruling on the expungement petition summarized below, “a model prisoner is not a model citizen.”  In other words, one cannot demonstrate that one lived “an honest and upright life” if one was in prison or jail during the time period at issue.  One must have been living in the community, with its temptations and challenges, yet living honestly and responsibly while following the law.

What is “an honest and upright life?”  Surely, this would mean that one avoided any civil judgements involving dishonesty, as well as any criminal wrongdoing.  It would also tend to suggest working full-time, going to school, having a family, attending church and being involved as a volunteer in the community.
Would being in jail or prison qualify?  One may smirk at such a question, as being in custody separates one from the temptations of life that are ever present outside custody.
This very question was posed in the case of Misael Vences Maya, who pleaded guilty to driving under the influence of alcohol (Vehicle Code § 23152(a)) with six prior driving-under-the-influence convictions and possession of methamphetamine (Health and Safety Code § 11377(a)).  Maya also admitted that he had served two prior prison terms (Penal Code § 667.5(b)).  During the plea colloquy, the prosecutor also advised Maya of the immigration consequences of his plea.
The judge then denied probation and sentenced Maya to four years and eight months in state prison consisting of three years (the upper term) for the DUI, an eight-month consecutive term for the possession of meth charge, and a consecutive one-year term for one prison prior allegation.  The judge struck the other prison prior allegation.  Maya had 571 days of actual custody credit. 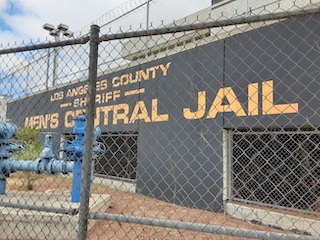 Mens Central Jail
On Christmas Day, 2012, Maya completed his prison sentence and was transferred over to the United States Department of Homeland Security.  The DHS then issued a removal notice because he had suffered a conviction for possession of a controlled substance other than 30 grams or less of marijuana for personal use (8 U.S.C. § 1227(a)(2)(B)(i); Padilla v. Kentucky (2010) 559 U.S. 356, 368, 176 L.Ed. 2d 284, 295 (the Immigration and Nationality Act commands removal of all controlled substance convictions except the “most trivial of marijuana possession cases.”).
In 2015, Maya filed a motion to reduce his possession of methamphetamine conviction to a misdemeanor under Prop 47 (Penal Code § 1170.18(f), (g)).  The judge, Bruce A. Young, in Ventura County Superior Court, granted the motion.
On April 11, 2018, Maya sought to have the now-misdemeanor drug possession conviction expunged under Penal Code § 1203.4a (People v. Khamvongsa (2017) 8 Cal.App.5th 1239, 1244-1245 (a reclassified drug conviction is a misdemeanor for all purposes, including expungement relief pursuant to 1203.4a)).
In support of his argument that he had lived an “honest and upright” life since the conviction, Maya stated that while in prison, he was never in trouble, attended Alcoholics Anonymous (AA) meetings in prison and participated in fire camp.
The trial court judge denied the motion and Maya filed a motion for reconsideration.  The judge denied the motion, citing to a probation officer report that pointed out that “[t]here remains no demonstrated, or measurable level of compliance in the community [by Maya] and there has been no way to evaluate his ability to obey all laws.”  The judge further went on to simply stated that being “in custody for substantial periods of time” cannot be considered leading an “honest and upright life” as required by the statute.  There was no way to determined whether he leads a law-abiding life when out of custody.
Maya then appealed the ruling to the Second Appellate District in Ventura.  In its ruling (People v. Misael Vences Maya (2019 DJDAR 2324)), the appellate court bluntly distilled down its holding to “a model prisoner is not a model citizen.”
We present this summary because the 1203.4a standard of requiring a judge to find, before granting expungement, that petitioner led “an honest and upright life” is unclear.  What does this mean?  This case seems to address that issue, although the circumstances of Maya’s case are quite unusual.
The citation for the Second Appellate District Court ruling discussed above is People v. Misael Vences Maya (2d App. Dist., 2019) 33 Cal.App.5th 266.
For more information about expungement, please click on the following articles:
Contact us.
Serving Torrance, Long Beach, Compton, Airport Courthouses and Other Courthouses.