Our client, age 41 in 2013, suffered a conviction for a first-time DUI out of the Fullerton Courthouse.  Using the public defender, he accepted a plea bargain wherein he was placed on three years of informal, or summary, probation, conditioned on his enrolling in and completing the three-month AB 541 program, attending the Mothers Against Drunk Driving (MADD) Victim Impact Panel (VIP) and payment of court fees of $390, plus penalties and assessments (total $1,914).

After entering the plea and promising to complete the obligations above, the client moved to North Carolina.  He did not even start the AB541 program or the MADD VIP program, let alone pay any of the court fees or fines.

Gist of This Summary:  Bench warrant outstanding for four years out of the Fullerton Court for a DUI.  Client had moved to North Carolina and on his own, without the judge approving online classes, had taken the online AB541 program as well as an online MADD VIP program.  He then calls Greg Hill & Associates and Greg appears with the outstanding court fees owed as well as the proof of completion of the two online classes.  The bench warrant is then recalled, the probation violation set aside and probation terminated.

He spoke to several private attorneys about how he could fulfill the requirements of probation from North Carolina and one attorney told him to take the AB 541 program online and to also do the MADD VIP program online.  The attorney who told him this did not tell our client that he needed judicial approval before doing so, so the client did both the program and the class online without the judge allowing this.  Moreover, once he completed each program, he did not file the completion documentation with the court.

The client also did not pay the court fines or fees.

Four years after entering his plea, his employer advised him that he had a bench warrant out of the Fullerton Superior Court and that if he did not take care of this, he would be asked to resign his job.

The client then called Greg Hill & Associates and explained the situation.  Greg responded by asking the client to forward him the proof of completion of the online AB 541 program and the online MADD VIP, but cautioned that since the judge never approved of him taking the class online, the judge certainly could refuse to accept such documents as fulfilling his plea bargain.

Greg then suggested that he could appear in the Fullerton Court with such documents and a check for the full amount of court fees outstanding and then ask the judge to recall and quash the bench warrant.  Greg said that if the client has the full amount of court fees, ready to pay, judges often are more agreeable to recalling the warrant.  However, since four years had passed, the judge could also be quite mad and insist that the client appear in person to admit the probation violation and be sentenced to some punishment for the violation.

In other words, Greg told the client that the judge might reject Greg’s request to appear on the client’s behalf to have the warrant recalled and then, the bench warrant would remain outstanding and the client would lose his job.

The client decided to retain Greg and give him all documents, plus $1,914 to pay the Fullerton Superior Court for his outstanding court fines and fees.

Greg then appeared in the Fullerton Superior Court, armed with the aforementioned documents and a check written out to “Clerk of the Court” (this is how a payment to the Orange County Superior Court is made) for the full amount owed. 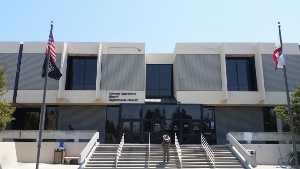 North Justice Center in Fullerton
The judge assigned to rule on the bench warrant then called the matter, recognizing Greg from a prior motion to suppress evidence that he had granted.  The judge was extremely cordial and recalled the warrant, allowed the client’s online classes to satisfy the terms of probation, accepted the $1,914 payment and then deemed the terms of probation fully satisfied.  He then terminated probation for our client.

Our client was overjoyed at the results and looked forward to having the conviction expunged now that probation had ended.