For a sample of our probation violation cases, click on the following case summaries to read a detailed description of each case.

Probation violations are one of the most common types of cases we handle. As the above case results show, there are often big risks – prison or jail time, which can turn a family upside down in many ways, including financially and emotionally.

The fundamental concept that most of our clients understand is that probation is a contract one makes with a judge. It is a promise to do or not do certain things and if one breaks that promise, the judge can punish the transgressor in various ways.

Probation violations can be based on a new criminal case or, more commonly, a failure to perform some condition of probation that the client promised.

Indeed, the California Supreme Court has announced a preference for probation revocations to trial the new case: "we wish to note that the most desirable method for handling the problems of concurrent criminal and probation revocation proceedings may well be for revocation proceedings not even to be initiated until after disposition of the related criminal proceedings." People v. Coleman (1975) 13 Cal.3d 867, 896. "Most desirable" and "not to be initiated" and "until after disposition" are the operative words there.

The Supreme Court then emphasized, four years later, that "prosecutors [should not] routinely disregard our recent admonition that the most desirable method of handling such cases is to refrain from initiating revocation proceedings until the related criminal prosecution is completed." People v. Belleci (1979) 24 Cal.3d 879, 888, fn. 7 [emphasis added], citing Coleman, supra at 896. 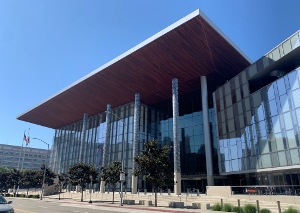 Governor George Deukmejian Courthouse
Long Beach Superior Court
More commonly, the probation violation is a failure to complete classes, pay a fine, perform community service, etc. What we find most often is that the client comes to us six or seven years after the conviction, usually because the court issued a bench warrant because of the omission or failure to perform some part of probation. When this is the problem, we recommend that one hire an attorney to appear with the client or for the client (as is allowed in a misdemeanor offense) to recall the bench warrant while showing proof of completion of the community service or a check for the unpaid court fines. We find it prudent to ask for a bench warrant recall while providing what is otherwise lacking, or curing the reason the bench warrant was issued.

When the offense related to DUI or a drug offense, we often recommend that the client consider attending Alcoholic Anonymous (AA) classes or Narcotics Anonymous (NA) meetings in advance of requesting a bench warrant recall, to show the judge that the individual is trying to comply with the spirit of probation for such cases.

When the client comes to us within three years or five years of the conviction with a probation violation, the goal is always to have the client reinstated on probation. This can mean that the judge add to the terms of probation as a sanction or penalty for the violation.

For more information about probation violations, click on the following articles: