Our client was in state prison at Delano, serving time for a probation violation and nearing his release date.  His wife checked with the Delano ombudsman to confirm that her husband would be coming home on the designated date for release.

Much to her surprise, as well as that of her husband, she was told that instead of being released, he would be transported to Torrance for a bench warrant for a misdemeanor probation violation on an earlier case.

In a Nutshell:  Client violated probation by picking up a new case in San Bernardino and being sent to state prison for it.  Greg appears in Torrance Court for bench warrant and probation violation in Torrance.  Resolves case for 60 days of custody concurrent with prison sentence, so no new punishment.

The wife was distraught, so she called Greg Hill & Associates in Torrance.  Greg listened to the wife describe the Torrance case and Greg explained that he thought the Torrance judge would certainly recall the bench warrant.  The wife went on to explain that her husband had the bench warrant because, after entering a plea to a violation of Penal Code § 148.9(a), refusing to provide identification to a police officer, he had agreed to a plea bargain of three years of summary probation, performance of five days of Cal-Trans and payment of $1,685 in court fines and fees (or service of 163 hours of community service).

However, before he could get started on fulfilling the terms of the plea bargain, he was bucketed in San Bernardino.

The San Bernardino case was a probation violation involving possession of a firearm by a felon.  Our client had entered into a plea bargain in the San Bernardino case and then did not report to his probation officer within forty-eight hours.  His probation officer immediately reported this to the judge, who issued a bench warrant and the client was arrested within a week.  The same judge then sentenced the client to four years in state prison for the probation violation. 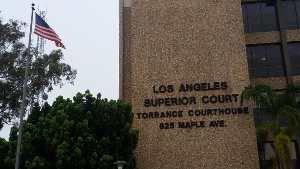 Greg went to the Torrance Superior Court first notified the Torrance District Attorney’s office in writing of his intent to add the case to the court calendar to recall the bench warrant.  The letter explained that the client was serving a four-year sentence in state prison on an unrelated charge. While such written notice is not required, it is a professional courtesy that is greatly appreciated and helps towards having the prosecutor more apt to discuss the case in a fair manner.

This letter was personally delivered and faxed to the District Attorney’s office.

On the day stated in the letter, Greg then went to the criminal clerk’s office and had the file added to the court’s calendar and brought up to the assigned courtroom.  The handling prosecutor was very appreciative of the courtesy notice Greg had delivered and even suggested that the client simply be sentenced to a short sentence to run concurrent with his state prison sentence and then have probation terminated.

This was exactly what Greg would have suggested and hoped the judge would order.

When the case was called, the judge recalled the warrant and asked why the client had not performed any Cal-Trans and paid no fines.  Before Greg could answer, the district attorney explained the situation and suggested, if Greg would admit a probation violation for the client, that the court simply convert the probation to sixty days of custody, concurrent with the time being served, credit for sixty days already served and terminate probation.

The judge, hearing this from the prosecutor, agreed.  She recalled the bench warrant, Greg admitted the probation violation, the judge then converted the terms of probation to sixty days in custody, to run concurrent with his current sentence, credit for sixty days already served, and terminated probation.

The wife of the client was extremely happy, as Greg had taken care of not only the bench warrant, but had probation terminated for her husband.