Home
Other Information
Criminal Defense Articles
What Punishment Do I Face for a Probation Violation?

What Punishment Do I Face for a Probation Violation?

Our office receives at least one phone call per week asking what punishment he or she faces for a probation violation.  Our answer is always that there is no standard punishment, set by statute, for example, for one who violates probation.  Rather, the judge has wide discretion in how he or she sentences one for violating probation.

The judge will take into account several factors in sentencing for a probation violation.  First, the court will consider the seriousness of the violation.  The violation may be not submitting to a drug test, or failing the drug test, if drug testing was a condition or probation.  The violation may be committing a new crime, failing to report to the probation officer, failing to appear in court for a court appearance, failing to pay a fine or restitution, or failing to comply with any other court order (such as enrolling in or completing, classes, community service or staying away from a specific location, i.e. a person’s residence or a business). 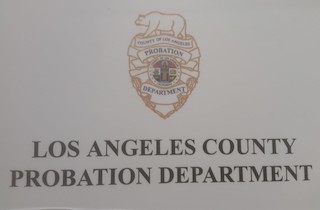 LA County Probation Department
How one presents oneself to the court is also taken into account.  If one is arrested on another crime and brought before the judge while in custody, this is not good.  It is better if one voluntarily brings oneself to court to resolve the problem, suggesting a sense of urgency, a attitude of responsibility and respect for the judicial process.  If the judge issues an arrest warrant or a bench warrant for one failing to comply with the terms of probation, it is good to present oneself in court as soon as possible; voluntarily.
It should go without saying, but merits mention here, that it is smart to wear clean, good clothes, comb one’s hair and be respectful to the judge.  It is smart to never interrupt the judge.

As mentioned above, the court has several options in ruling at a probation violation hearing.  The court can revoke violation and sentence the client to jail or prison.  When this happens, the term of jail cannot exceed the term originally imposed by the court.

Moreover, when this happens, the client does receive credit toward the length of the sentence based on time previously spent in prison, jail or a residential treatment program.

The court can also reinstate one on probation, but with modified terms that are usually move difficult and meant to punish the client for his or her conduct.  For example, probation may be modified to add more community service, Cal-Trans or community labor.  The client may also have to serve time in county jail, but the period of probation may not exceed the length of the original term of probation.  The court may also order that the client enroll in and complete an additional class.

The court may also reinstate the client on probation under the same terms and conditions.  This is the best outcome, obviously.