Our client had been convicted of a felony in 1982 when he was only 19 years old.  The crime was passing numerous bad checks in Pomona and, once on formal probation, the client had paid off all the money owed, except for the last $240 dollars.

Distilled Down:  Client, age 52, arrested by police for a bench warrant from a 1982 case (32 years ago); jail for 43 days; public defender in Pomona cannot get client released; Greg appears & client released in 24 hrs.

He then stopped reporting to probation and was deemed to have absconded.  A bench warrant was issued by the Pomona judge then assigned to the case.
The client then established his own taxi business and flourished for over thirty years.

Fast forward to 2014 and he and his wife decided to go on a cruise.  As they were literally going through man-overboard drills, wearing life jackets, a staff member from the crew asked our client to step out from the drill.  He then asked him to walk down a few floors to a waiting police officer, who handcuffed our confused client.

The police officer explained that our client had a bench warrant from 1982 out of the Pomona Superior Court.  Our client’s family vacation was ruined, but that was perhaps the least of his problems.

Once the client was taken into custody, the District Attorney’s Office did not even try to find the file.  The probation department also did nothing.

The reader of this summary should note that the right to a speedy trial, under the Sixth Amendment to the U.S. Constitution, is codified in California law at Penal Code § 825.  Under section 825, a person must be arraigned within 48 hours, not including weekends or holidays.

The Sixth Amendment right to a speedy trial and Penal Code § 825, however, do not apply on a probation violation.  Instead, Penal Code § 1050 applies, but it is less specific.  It states in general language that all hearings must proceed as soon as practicable, and not be delayed unless good cause is shown.  The public defender assigned to our client’s case, however, did not push on this provision very hard, if at all.  Despite requesting bail for our client, which a court can deny in its discretion on a felony, the public defender did not demand dismissal.

The client’s family believed the public defender did not really care about our client, so they called Greg Hill & Associates.  The client’s wife spoke with Greg Hill and later with the client.

Within 24 hours, Greg prepared a motion for dismissal of the probation violation hearing, or in the alternative, to release the client on his own recognizance.  He also called the courtroom clerk for the department hearing the matter and had the clerk request the client be brought from Men’s Central Jail to Pomona for a hearing.  Greg also spoke with the handling district attorney as a courtesy to advise he would be setting the matter for a hearing and substituting in as our client’s counsel.  Greg also called the public defender’s office, but the public defender assigned to the case had left the office for the day.

The following day, Greg appeared in court and filed his brief, explaining to the judge why he could dismiss the probation violation charge because, after 42 days, no matter what excuse the prosecutor may have for prolonging the probation violation hearing, if could not constitute good cause.  If the file for our client’s 32 year old case cannot be found by now, it most likely will never be found.  After more than six weeks, the prosecutor can no longer use the “we’re looking for the file” excuse.  Greg argued it was obviously lost and perhaps destroyed. 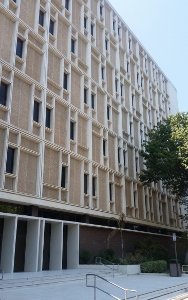 Pomona Superior Courthouse
The Pomona judge read Greg’s motion and then called the case.  He agreed with Greg and released the client forthwith from the courthouse. The client was quite happy, as he was able to return home for Christmas with his family, including his two teenage children.