Our client entered into a plea bargain in 2006 to resolve a misdemeanor domestic violence and criminal threats case against him in Long Beach Superior Court. At the time, our client was 28.

The underlying matter was arose when our client was late in returning home with the family car.  His wife yelled at him and lectured him about how irresponsible he was.  He was ten minutes late.  He pushed her away because she was yelling at him from very close.  He then left and she called the police.

In 65 Words or Less: Misdemeanor domestic violence case from Long Beach Superior Court.  Client violates probation and bench warrant issued.  Client moved to Washington State and unaware of it for 8.5 years.  Greg appears in Long Beach Court to have bench warrant recalled, which judge does but sets a probation violation hearing and demands client appear in person.  Client later does so and probation terminated with no punishment.

When she called the police, she reported a vehicle theft because it was her car.  She did not mention any domestic violence.  It was only after police came to take a report and she described what happened did police see the matter as a domestic violence case.  Moreover, since she admitted to police that our client had permission to use the car, her grand theft auto claim became meritless.

Our client was arrested at his parents’ home a few miles away.  He entered into a plea bargain wherein the criminal threats case was dismissed and our client pled no contest to a violation of Penal Code § 243(e)(1).

He was placed on three years of summary probation, contingent upon him making a $200 contribution to a battered women’s shelter, paying $655 in court fines and fees, attending 52 sessions of a batterer’s program and performing 40 hours of community service.  The client paid the $655 to the court and completed the 52 batterers classes, but then he lost his job in 2006.

He found a job within a month in Seattle, Washington as a house painter and left.  He never made the $200 contribution or performed the community service.  As a green card holder and not too familiar with the judicial system, he thought it was no big deal to do what he did. 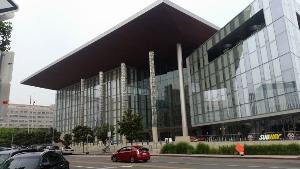 Governor George Deukmejian Courthouse
(Long Beach Superior Courthouse)
Meanwhile, in the Long Beach courthouse, when the deadlines to show proof of completing community service and payment of the contribution passed in 2007, the judge issued a bench warrant for our client’s arrest.

The client followed Greg’s advice and the judge did set aside the warrant.  However, the judge also set a probation violation hearing, warning that the only punishment he could issue, now that his jurisdiction had ended three years after 200, was jail time.

Greg then prepared a six-page sentencing memorandum for the judge, describing the facts of the case and addressing each of the sentencing factors as stated under the California Rules of Court that a judge must evaluate.  The brief also detailed the reasons for the violation and explained that all which remained of probation was the 40 hours of community service.

Greg explained to the client and his wife that he expected the client to most likely serve 10 to 20 days in country jail for the probation violation.  The client was extremely worried about this due to his immigration status, as he feared he would be subject to deportation.

The Long Beach judge read the sentencing memorandum very carefully in court, during which time the courtroom remained silent.  Our client was quite nervous.  The Long Beach City Prosecutor recommended ten days in county jail.

The Long Beach judge ruled no punishment and closed the case, wishing our client good luck in Seattle.

Our client felt very lucky and relieved.  His wife actually cried.  She and him both feared jail for him and deportation.  This had been averted.