Our client, when age 32, met with a woman who he suspected was a prostitute.  He wanted a longer-term relationship, not just a one-night stand.  She seemed different from most of the women he met.  So, when she asked him what he did for a living, he knew he had to say something that made her interested.  He responded, “I manage a few girls, keeping their business good.  You need help with yours?”
It was a lie.  She also was no prostitute, but a police decoy set out on Long Beach Boulevard as part of a prostitution sting.
Our client was arrested for more than just solicitation of prostitution (Penal Code § 647(b)).  He was arrested and later charged for attempted pandering (Penal Code §§ 664/266I(a)(1)).
Our client did not post bail and readily accepted free representation from the public defender’s office.  He then agreed to the first offer from the prosecution that allowed him freedom: five years of formal probation, 30 days of Cal-Trans and a stay-away order from Long Beach Boulevard between the 91 and 105 Freeways.
Over the next two years, he generally stayed out of trouble, but only did 7 of the 30 days of Cal-Trans.
He worked as a barber and had a side business of buying and selling English bulldog puppies.  This side business in buying English bulldogs led him to fly to Houston to buy a certain puppy that was for sale.
He landed in Houston and was able to borrow a friend’s car to drive to pick up the puppy.  As he was driving there, with nearly $3,000 in cash to buy the puppy, a police officer pulled him over and searched the friend’s car.  The police officer found over a pound of marijuana in a backpack in the back seat of the car that our client told the officer he did not even know was there.
On went the cuffs and our client soon was in custody in Houston.  He was charged under Texas law with what California would characterize as possession and transportation of marijuana with the intent to sell, but which Texas described in a different way. 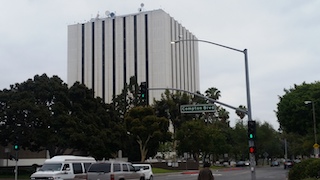 Compton Courthouse
Our client posted bail (bail in Texas is significantly less than in Los Angeles County for similar crimes) and retained a reputable Houston criminal defense firm.
He then returned to Los Angeles and found a letter in his mailbox from the Los Angeles County District Attorney’s Office advising him that probation violation proceedings were filed against him in the Compton Courthouse on his attempted pandering case.
The client then called Greg Hill & Associates and spoke with Greg Hill.  The client explained the facts of his probation and his new case in Houston.  Greg asked if the client had received permission from his probation officer or the judge to travel out of Los Angeles County to Houston before going there and the client said no.  The client explained that he was seriously concerned about going to prison because he had sole custody of his sixteen-year-old daughter (the mom was in and out of drug rehabilitation programs and unreliable).
Greg responded that he saw the probation violation as two violations, one rather certain and one which might not materialize.  The clear violation was our client just leaving the jurisdiction without prior approval.  The unclear violation was whether the Houston case might be dismissed on a motion to suppress in Texas because our client did not consent to the search of the vehicle, which our client’s counsel in Texas considered a legitimate issue.
Greg then went to the Compton Superior Court with our client.  As Greg viewed the potential probation violation from the Houston arrest, the judge saw it as two parts.  For leaving the jurisdiction without approval, he sentenced our client to 30 days in Los Angeles County jail (our client served less than six hours and was released) and then put over the remainder of the hearing pending resolution of the motion to suppress in Houston.  With the 30-day sentence, the judge also deemed the remaining 23 days of Cal-Trans complete.
As happens in Los Angeles County, the motion to suppress filed by our client’s counsel in Houston triggered a plea bargain from the prosecutor there of reducing the felony to a misdemeanor and no jail time, which our client accepted.
Meanwhile, back in Compton, the judge hearing the probation violation matter for our client’s failure to obey all laws (including those outside California) finally held the probation violation hearing.  Our client admitted to the violation and was sentenced to 15 days of Cal-Trans.
Ironically, and this was not lost on the client, his arrest and conviction in Texas converted his remaining 23 days of Cal-Trans here to six hours in Los Angeles County jail and eight fewer days of Cal-Trans (plus attorney fees, anxiety and a great deal of stress).
For more information about probation violation issues, please click on the following articles:
Contact us.
Serving Torrance, Long Beach, Compton, Airport Courthouses and Other Courthouses.