Downey, DUI Dismissed on Motion for Denial of Speedy Trial

Our client, age 26, was an 18-wheel driver. He was transporting a load which included bottles of alcohol.

He had picked up the cargo in the Port of Los Angeles and was driving north on the 710 Freeway when he decided to exit the freeway in Downey. He had felt the load shift and wanted to take a look inside his truck. It was about 10:00 p.m. and a week day. This was 2011.

Without All the Details, What Happened?:  Big rig driver charged with DUI and leaves to Tennessee. Four years later his employer tells him about the bench warrants in California. Case dismissed on Serna motion.

According to a 911 call, our client sideswiped two cars as he was exiting the freeway. The caller gave the 911 dispatcher his name, address and phone number. He then watched as our client pulled over to the side of the road and used towels to mop up the mess of broken bottles and alcohol spilled inside the cargo area of his truck.

Our client’s hands were soaked in alcohol from the wet towels and his clothes were partially wet with alcohol, too.

A CHP officer was dispatched to the scene and saw our client on the side of the road. The 911 caller stayed at the location until the CHP arrived and then positively identified our client to the CHP as the driver.

The CHP smelled all the alcohol and noted the reported sideswipes. He quickly concluded that our client was DUI while at work driving an 18 wheel truck.

Our client explained that the smell of alcohol was from the load inside and offered to show the officer, but the officer declined the offer to look inside the truck. The officer also did not even look at the side of the client’s truck to see if there was damage to the side of the truck that would have confirmed the sideswipe reported.

Instead, the CHP officer asked our client to perform certain field sobriety tests on the road side. Our client, not from California, grew angry that he was being prejudged as drunk, so he refused to submit to the tests. He also refused to submit to a preliminary alcohol screening (PAS) test at the scene.

The CHP officer then arrested our client and took him to the local police station. Our client again refused to submit to a blood or breath test. He was then booked and held for a few hours.

The police then let our client leave the station, allegedly only after he signed a promise to appear in court about two months later.

The client then did leave, returning to Tennessee. He worked there and lived there for the next four years until one day, his employer told him about a bench warrant in California.

Shocked, the client called Greg Hill & Associates and discussed the case with Greg Hill. Greg described a Motion to Dismiss for Deprivation of one’s Sixth Amendment Right to a Speedy Trial. Greg said such motions are not always granted, especially when the defendant moves outside of California or even leaves right after being arrested. Greg warned that judges also are reluctant to grant such motions for fear of being seen as rewarding someone who did not come to court, perhaps when they signed a promise to appear.

However, the client told Greg that he never signed anything promising to appear in court. The client then retained Greg Hill & Associates. 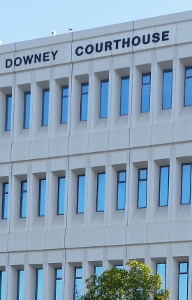 Downey Superior Courthouse
Greg first appeared in the Downey Superior Court to have the bench warrant recalled. The judge did recall it, but ordered that our client appear at the second hearing, when Greg would file the Motion to Dismiss (also called a “Serna Motion” in misdemeanor cases).

This irritated Greg because it was unnecessary for the hearing and it seemed motivated by the judge to force a plea bargain instead. The client, however, agreed to come out to California for the hearing.

Greg Hill & Associates then filed the motion and discovered, quite fortuitously from the prosecutor, that the DA’s office had lost the 911 call and the phone number for the 911 caller was now out of service. This was actual prejudice to defendant, as the content of the 911 call was relevant toward the propriety of the traffic stop and then arrest, especially when the CHP officer failed to take pictures of any damage to the client’s rig.

On the day set for the hearing on the motion, the DA failed to subpoena any CHP officer to the hearing. This upset the judge.

The judge then continued the hearing about two weeks and ordered our client to return again to court.

Our client grumbled about this, but did return despite the enormous expense to him. At the second hearing on the motion, the young DA subpoenaed the wrong CHP officer quite luckily for our client. The judge then granted the motion. The case was dismissed. Our client was very happy indeed.

The lesson from this case was that while our office was aware of the risks of failure in such a motion, we prepared it and filed it. As the case facts developed, the case facts got better and better. It often pays to be aggressive, or in Latin, “Fortis Fortuna Adiuvat” (fortune favors the brave).