In 2005, when our client was just 23, he was arrested for driving on a suspended license when his license had been previously suspended when he refused to submit to a breath or blood test in a DUI case (Vehicle Code § 14601.5(a)).  The suspension was for a year, but during that time, our client kept driving, eventually catching the eye of a Carson Sheriff when our client ran a stop sign, a violation of Vehicle Code § 22450(a).

Summary:  2005 case for driving on suspended license due to a DUI and failure to stop at a stop sign, client fails to show in court, bench warrant until 2015, case dismissed.

The client was taken to the Carson sheriff’s station and then released with a signed promise to appear in the Compton Courthouse in about four weeks.
As the reader of this summary may know, driving on a suspended license due to a DUI is a mandatory minimum ten days in county jail.  There is no exception unless the driver can show notice of the suspension was mailed to the wrong address.

Our client did not show up for court in the Compton Courthouse.  He allowed a judge there to issue a bench warrant for his arrest.  It did not catch up to him for ten years, until he landed in federal prison on charges of transporting marijuana for sales. 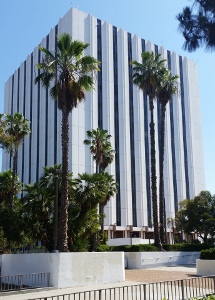 Compton Superior Courthouse
After about a year in federal prison, he was told of the open case in Compton and placed in solitary confinement, according to his family that called Greg Hill & Associates to see what could be done.

Instead he was under the custody of the Federal Bureau of Prisons, so section 41500 might not apply unless the prosecutor did not understand this distinction and simply agreed to dismiss the case.

Greg explained this to the client’s family, who provided Greg with ample documentation that their son was under the Federal Bureau of Prisons.  Greg explained that he would have to be careful in how he approached the prosecutor and judge so that he could seek dismissal either under 41500(a) if the prosecutor was willing to dismiss the case anyways, or under People v. Serna, which allows a judge to dismiss a misdemeanor case when there has been a violation of a defendant’s right to a speedy trial.

Greg explained that the “Serna route” was legally stronger, but more complicated.  However, application of 41500(a) might seem easier to a young prosecutor who was not familiar with the code section.

Greg thus went to court and had the matter placed on calendar.  He approached the very young female district attorney in the courtroom, introduced himself and briefly explained the case.  Greg explained that the client was in federal prison.  He then asked the prosecutor is she would be willing to dismiss the case under Vehicle Code § 41500(a).  She was not familiar with the code section at all, so she looked it up and read it over.

The judge agreed and dismissed the case.  The client’s family was very happy, as was the client.

For more information about bench warrants and the right to a speedy trial, click on the following articles:
Contact us.
Serving Torrance, Long Beach, Compton, Airport Courthouses and Other Courthouses.