If you want to read about our driving offense cases, please click on the case summaries below to read a detailed description of each case.

If you want to read more of our driving offense case summaries, please click here.
The summaries of the above driving offenses are some of our better results from the last three or four years.

A few common issues arise in each traffic offense, whether it be for speeding, hit and run, or driving on a suspended license. Most of the driving offense cases we handle arise because the client simply is too busy to appear in court themselves. Or there is a bench warrant outstanding and the client is concerned that the judge might “bucket” him or her (put them in jail). Or the client is concerned about the points associated with the offense the DMV will assign and wishes to avoid or minimize the points and / or the effects such a violation will have on insurance premiums.

Absent from our results are red-light tickets, although we certainly have handled such cases in the past. To properly fight such a ticket, it is expensive. There either has to be a great deal at stake, which is rare, or the principle of the ticket is paramount. We have fought such tickets by changing the venue to the downtown Los Angeles courthouse (or downtown Riverside). We have demanded the calibration, inspection and maintenance records of the camera to make sure the photographs and video are accurate. It can be expensive and, sadly, is often futile. Judges do not want to reward such diligence or thoroughness for fear of encouraging others, so we find, often such cases are resolved without ever truly getting to the merits.

In cases involving lack of a driver’s license, often the client is not a U.S. citizen and until January 1, 2015, simply could not obtain a valid California license. Therefore, the client was often forced to perform community service and / or pay a steep fine. This will change after January 1, 2015 when the DMV changes its rules on whether a non-citizen can obtain a valid California license. 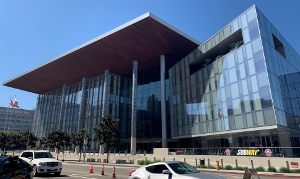 Governor George Deukmejian Courthouse in Long Beach
When a hit and run is an issue, the stakes go higher, especially when there are injuries. When there are no injuries, a motion for civil compromise under Penal Code § 1377 and 1378 often nicely dismisses the case, provided the victim of the hit and run is willing to accept payment for the damages from our client or his insurance. Other times, such non-injury cases are resolved with a safe-driving course and a small fine, depending upon the courthouse and the client’s prior history.

When a hit and run involves injuries, prison time is a big concern. As our summaries above show, when such a case is at issue, the facts are very important. If the client was never positively identified, our strategy is to never let the client convict himself or herself. Often, if defendant holds out long enough, the prosecutor will simply dismiss eventually based on lack of sufficient evidence. This is especially true when the client contact us before the police even begin their investigation. In such cases, it is most important that the client remain silent and not say anything at all that could be twisted by police to substantiate our client’s involvement. We have handled several such cases over the years and, in each case where our client resisted the urge to cooperate with police by talking, no case was filed.