Our client, age 19 in 1999, was stopped for shoplifting a single album from Tower Records.  The Los Angeles Police Department came to the store and he was issued a ticket for violating Penal Code § 484(a), petty theft.  He was told he could be taken to jail or if he signed a promise to appear in the Van Nuys Courthouse in about six weeks, he would not be taken to jail.  The client signed the promise to appear, was handed the ticket and the police left.
The client lived in the San Francisco area at the time, so after being given the ticket, he returned home to Northern California and forgot about it.
On the day of the arraignment, our client was not in court as he promised and the judge issued a bench warrant for him.  As the reader of this summary may know, when a judge issues a bench warrant, the court clerk does not send the defendant a courtesy letter advising him or her that there is a bench warrant.
In the following years, he had been pulled over by police and never told about any bench warrant.  He even was convicted of several other crimes and spent time in prison, as well as a few short stints in county jail.  However, throughout all these experiences with jail and even prison, he was never told about the bench warrant out of Van Nuys Superior Court. 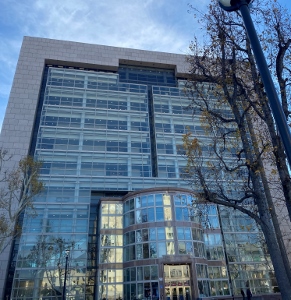 This all changed in 2019 when he and a friend decided to open an insurance brokerage.  Our client needed to become a licensed insurance broker by the State of California.  In applying for this license, our client was told that he had a bench warrant out of the Van Nuys Superior Court concerning this 1999 case.
The client called multiple attorneys, but hired Greg Hill & Associates because of Greg’s experience in handling such bench warrants.  Greg listened to the client explain what had happened at Tower Records two decades earlier.  It was good for our client that Tower Record does not even exist anymore, so the prosecutor could not call up Tower Records for help in locating any witness.  Moreover, the value of the item stolen was so low that this was not the type of case that the prosecutor would consider a major crime.
Greg then wrote the Los Angeles City Attorney’s office and the Van Nuys District Attorney’s Office as a professional courtesy, letting them know about ten days prior to when Greg would appear in the Van Nuys Courthouse to have the bench warrant recalled.  Greg did this so they could ensure they had their file in case it had been sent to an off-site storage area, as many courts utilize simply because the courthouse facilities are too inadequate to hold too many files.
The day of the bench warrant recall arrived and Greg went to the Van Nuys courthouse to have the bench warrant recalled.  The clerk assigned the matter to a department and Greg reported there.  The clerk there then retrieved the file from the penthouse of the court building.  This took about an hour.
The courtroom clerk asked Greg where the client was and Greg explained that he was at home in Northern California, so Greg was appearing on his behalf under Penal Code § 977(a).  The clerk told Greg that the judge would not permit this on such an old bench warrant – he wanted to see the whites of our client’s eyes.
Greg then spoke with the Los Angeles City Attorney who also asked Greg where the client was and Greg explained that he was in Northern California, at work.  Greg then asked the City Attorney if such an appearance by him was really necessary given the defendant being out of business and the scope of the theft being just an album.
The Los Angeles City Attorney agreed, suggesting instead that he amend the complaint to add a count for a failure to appear in court under Penal Code § 853.7 as an infraction only so our client could plea to this today and he would dismiss the petty theft charge.
Greg agreed to this and the judge called the case.  As the clerk stated, the judge asked Greg where the client was and Greg explained that the client was in Northern California, but that Greg and the Los Angeles City Prosecutor had agreed upon a way of resolving the case.
The Los Angeles City Attorney then explained for the judge how he agreed to dismiss the petty theft charge and that Greg, on behalf of the client, would enter a no contest plea to an amended charge for an infraction for failing to appear.
The judge was happy with this and Greg entered such a plea, which came with it a $50 fine, plus penalties and assessments, or about $300 total.
The client was extremely happy that Greg was able to resolve this case so fast and have the theft charge dismissed, as it would make him seem like a thief to the State of California in reviewing his license application to become an insurance broker.  A conviction for theft might delay or even be grounds to deny such a license and this was avoided.  The client was happy with this.
For more information about bench warrants and shoplifting, please click on the following articles:
Contact us.