Home
Other Information
Criminal Defense Articles
What Is Involved in a Bench Warrant Recall Hearing?

What Is Involved in a Bench Warrant Recall Hearing?

The answer to the question posed in the title to this article depends upon why the judge issued a bench warrant.  We find there are generally three categories of reasons why a judge may issue a bench warrant, although there are a few other reasons that are more uncommon.

In a Nutshell: A bench warrant recall hearing can proceed very smoothly if one first knows why the warrant was issued and, second, if one can file documents needed by the judge or pay outstanding fees owed.  It is a good idea to extend the professional courtesy of letting the court clerk and the prosecutor know one plans on appearing a day or two prior.

The first category of reasons is because defendant failed to appear at his or her arraignment.  The second is when defendant did show up in court for the arraignment, but then stopped appearing and the judge issued a bench warrant.  The last, and perhaps most common category is when defendant resolved the case, i.e. through a plea bargain, or through a trial to a verdict and then defendant failed to appear in court for a progress hearing or proof of enrollment hearing or failed to pay a court fine or fee.
Resolution of each type of bench warrant involves different strategies and considerations.  In the first category of bench warrants, if one failed to appear for one’s arraignment, we would first and foremost want to know if defendant posted bail and if so, when.  Bail may have expired, as the contract for the bail bondsman posting bail is usually one year.  If more than a year has passed, the client may need to recontact the bail bondsman to renew the contract.
We would also want to know whether the case was a felony or a misdemeanor.  Generally speaking, in California, an attorney can appear on behalf of a client under Penal Code § 977(a) on a misdemeanor case.  There are exceptions to 977(a) for DUI matters, which more and more judges are invoking recently, we have found.
In any felony case, generally speaking, the client must appear in court with the attorney, unless the client had earlier signed a waiver of personal appearance under Penal Code § 977(b) to allow the attorney to appear on his or her behalf.  We have attempted to have clients execute such a waiver on felony cases to have a bench warrant recalled, even having the signature notarized and including a photocopy of the client’s driver’s license or passport, but judges usually do not accept such a waiver signed outside court.  We have had a few judges accept this waiver, however. 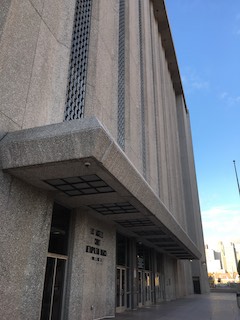 Metro Courthouse
We also would want to know how long ago the arraignment was and why defendant failed to appear in court.  If defendant became extremely sick prior to the arraignment and was hospitalized at the time of the arraignment, we would want the client to produce medical documentation showing such a hospital stay on the same date as the arraignment.
Occasionally, our client failed to appear in court for an arraignment and did not sign a promise to appear.  If the matter is a misdemeanor and more than a year has passed since the crime, a judge may dismiss the case upon a motion to dismiss for delay in prosecution in deprivation of defendant’s Sixth Amendment right to a speedy trial.  This type of motion in a misdemeanor case is called a Serna motion.  Serna v. Superior Court (1985) 40 Cal.3d 239.  To prevail on such a motion, it is best if defendant can point to some prejudice caused by the passage of more than a year, i.e. a witness is missing, evidence was destroyed (or deteriorated, i.e. blood in a DUI), or the scene of the crime has changed (defendant no longer lives in the apartment, so the furniture inside is changed, or perhaps was thrown away and it was important to recreating the crime).
A second category of bench warrant arises after defendant appeared in court, but then stopped appearing.  We would want to know why defendant stopped appearing and if a condition of his or release was to attend classes, i.e. Alcoholics Anonymous (AA) or Narcotics Anonymous (NA) classes.  Did the client continue attending such classes?  If so, it would be wise to bring such proof to court to demonstrate defendant’s good faith in following the judge’s orders despite not showing up in court for some reason.
When a client stops showing up in court, we would also certainly want to know if the bail bond expired and what the bail amount is for the charges, as well as what the bail amount is associated with the bail bond.  We would advise the client to get in contact with the bail bondsman to possibly reinstate the bond once the warrant is set aside by the judge.
The last category of bench warrant, which is perhaps the most common, is one issued when the client fails to appear in court after the plea bargain or verdict, or fails to file a document in the clerk’s office or pay a fine in the clerk’s office.  The client often does not know the reason for the warrant, but has been told of it, often by an employer worried that the client will be arrested and then, while in police custody, miss work.
Our office will thus need to get the minute order associated with the issuance of the bench warrant to clarify the reason(s) the judge issued the warrant.  If the reason is failure to pay a fine or failure to file a document, we suggest that when our office appears in court to request the warrant be recalled, that we have the fine payment ready to pay (i.e. a check for the amount outstanding to show the judge) or the document that should have been filed earlier.  Sometimes, a warrant is issued because the client stopped attending a court-ordered class.  If this is the case, we need to request re-enrollment orders from the judge, but it is good to be able to explain to the judge why the client was dropped from the class and if there is documentation to show this, i.e. a hospital record, it is good to show this to the judge when requesting that the warrant be recalled.
For more information about bench warrant issues, please click on the following articles:
Contact us.
Serving Torrance, Long Beach, Compton, Airport Courthouses and Other Courthouses.