Our client, age 24 while an accounting department employee of a large luxury hotel in Beverly Hills, was struggling to make payments on his student loans from U.S.C.  He was in a good job and had recently married.  He was just barely making his rent, car lease, student loan and other expenses.  His wife was working, too, and yet their monthly bills were just crushing them.
At his work, guests were required to pay in advance for most services from the hotel, so they would deposit a large sum of money in trust for the hotel to draw from to pay their room service, bar tab, dry cleaning, etc. bills.  When the client ended his or her stay, the remaining balance was then refunded to the guest’s credit card or bank account.
Our client saw other employees “returning” the unused portion of the guest trust money to themselves.  It was too easy.  Employees in accounting would make a computer entry stating the money was returned to a guest’s Wells Fargo, Chase or Bank of America account, but in fact the numbers on the account were associated with the hotel employee’s own account instead.
Our client began “refunding” money to his own bank account from hotel guests.  He would transfer such money in sums of $400 or so, an amount a hotel guest could easily “drop” in an extended stay at the luxury hotel, just on a large group dinner, for example. 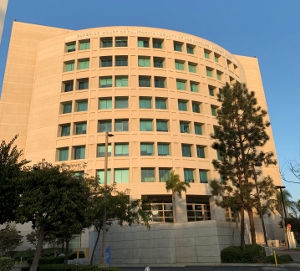 Airport Courthouse
Our client, once he received the large sum, would then use the money to pay for his student loan debt, car lease, rent, etc.
An internal audit of the hotel’s accounting department uncovered this fraud and attached about a dozen such transactions to our client.  He was terminated the same day.  When asked why he did it, he allegedly told his boss, “I have to pay off my student debt from U.S.C.”
Our client’s boss, after firing our client, went to the Beverly Hills Police Department and filed a police report.
The Beverly Hills Police Department then assembled a report and forwarded it to the then-DA at the Beverly Hills Superior Court.  The District Attorney’s Office then filed a criminal complaint alleging one count of felony grand theft, Penal Code § 487(a), against our client.  Our client was never notified of the filing or told about the case.  The case proceeded to an arraignment without our client present and a bench warrant for him was issued by the judge.
Eight years later, our client’s employer advised him of the outstanding bench warrant for a felony case of grand theft.  Our client knew what this concerned, as he was never told by his employer that they were seeking the return of the money and he kept expecting them to request this.  The criminal complaint was their belated attempt to have this money refunded, finally.
Our client contacted Greg Hill & Associates and spoke with Greg Hill.  Greg explained his experience in handling similar cases and described how the top priority should be paying back the hotel ASAP, which our client was capable of doing now, and then seeing if the prosecutor would agree to reduce the case to a misdemeanor.
First of all, however, there was the urgent need to have the bench warrant recalled.  Greg put the client in contact with a bail bondsman to have the paperwork ready for posting a bond in case the judge required this when the client and Greg appeared in the Airport Court (all the Beverly Hills criminal matters were transferred to Airport Courthouse when the Beverly Hills courthouse closed).
The client and Greg then appeared two days later in the Airport Courthouse.  The judge, who had a reputation as being rather tough, was extremely nice, recalling the bench warrant without requiring our client to post bail, and even suggesting to the prosecutor that he’d reduce the felony to a misdemeanor if the client paid off the hotel for the total allegedly taken.  The DA agreed to this, but cautioned that the client would also have to perform a healthy bit of community service to earn the misdemeanor.
Our client agreed quite readily and Greg thereafter worked with the hotel to coordinate payment of $4,174.50 to it from our client.
The client and Greg returned to the court about four weeks later, showing a receipt for payment of the outstanding sum allegedly taken and the judge did reduce the case to a misdemeanor.  As part of the plea bargain, our client was required to perform thirty days of approved community service, which he was happy to perform, and pay court fines of $220.
The client was ecstatic that he avoided a felony conviction and the lifelong stigma of this.  When the client finished informal probation in three years, or earlier if he finishes the community service quickly, our office will ask the judge to expunge the conviction from his criminal history.
For more information about grand theft, please click on the following articles:
Contact us.