For many people, an arrest for shoplifting can result in a charge of grand theft.  This certainly can be quite a shock, as grand theft suggests a theft of a large amount of money, personal property or services.  It also suggests a professional thief, or a hardened felon.

Summary in 55 Words or Less: Grand theft (Penal Code § 487) is a “wobber,” meaning it can be prosecuted as a felony or a misdemeanor.  A conviction for felony grand theft can be punished by up to three years in state prison, before any sentencing enhancements apply.  Restitution to the victim is usually one of the prosecutor’s top concerns.

However, shoplifting a nice watch or jewelry valued over $950 qualifies as grand theft, carrying with it a possible jail sentence up to one year or, if filed as a felony, a prison sentence of sixteen months, two years or even three years, depending upon the circumstances.

Grand theft, distinguished from petty theft ($950 is generally the petty theft limit), is the taking away, carrying away or driving away with the property of another without consent or the fraudulent appropriation of property entrusted to him or her.  The fraud can be by an affirmative representation or pretense, when done knowingly and intentionally, to deceive another to into giving him or her money, labor, real property (i.e. land or a house) or personal property. 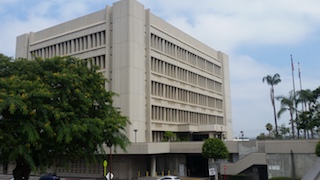 The defenses to grand theft start with lack of specific intent to steal or defraud.  This defense is often not realistic in light of the circumstantial evidence in store security video of someone walking out of a store with merchandise taken out of a package, stuffed into a purse or jammed into one’s pockets.  The defense, in larger cases, also is a mere academic nicety when there are loads of e-mails showing an intent to permanently deprive someone else of property.

The second defense is that the property actually belonged to the client.  This can be shown through receipts or otherwise.

The third defense is that the victim consented to the taking, perhaps even in order to set up a prosecution.  This is rare, but it does happen, especially in cases involving a long contentious history between the client and the victim, including between those who had a romantic relationship.

No theft case would be properly defended or handled without a discussion of restitution when the client lacks a viable defense, as is often the case.  The more restitution a client can pay the victim toward making the victim “whole again,” the easier it is to negotiate a plea bargain where no jail or no prison is possible.

When the theft is charged as a felony and the client has no prior criminal history, or a minimal criminal history, and the amount of loss is relatively low, a motion to reclassify the case as a misdemeanor under Penal Code § 17(b) must be considered.