Our client, age 29, was convicted of felony DUI in Long Beach Superior Court in August of 2013.  He quickly entered into a plea bargain and his driver’s license was suspended.
Two months after his plea, while he was on probation, he was pulled over for allegedly speeding on Gaffey Street in San Pedro.  The officer discovered that our client’s driving privileges were suspended and issued our client a ticket for driving on a suspended license.  He signed a promise to appear in the Long Beach court, but never did so.  However, he advised his DUI attorney about the ticket and even faxed him a copy of it and the attorney told him that he would take care of it for the client.
Our client believed the attorney and in reliance thereon, never checked on whether the attorney indeed appeared on court for him.  He trusted the attorney.  About two years later, he renewed his driver’s license and was issued a new license.
Fast forward four years and eight months and our client was happily living in Long Beach.  He then applied to be a barber at a country club and was told by the country club’s human resources representative in charge of hiring that there was a four and a half-year-old bench warrant for him in Long Beach Superior Court. This prevented the country club from hiring him. 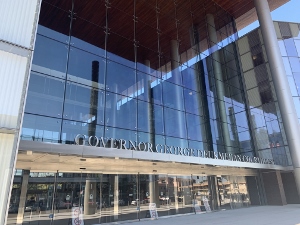 Long Beach Courthouse
The client immediately called his prior attorney to ask if there was a mistake in his resolving his traffic ticket for driving on a suspended license due to DUI.  The attorney refused to answer his calls and never spoke to our client.
The client then contacted Greg Hill & Associates and asked for immediate help.  He explained that the DMV had issued him a valid license, so he was confused.  Greg explained that the DMV may have issued him a license in error (because it is not supposed to issue or renew a license when there is an open bench warrant).
Greg further explained that a conviction for violating Vehicle Code § 14601.2 carries with it a mandatory ten days of county jail.  However, Greg commented, sometimes a prosecutor would be sympathetic to this penalty and amend the complaint to allege another violation that spares the defendant the mandatory jail sentence.  Greg explained how the complaint may be amended to allege a violation of Vehicle Code § 14601.1 or 14601.5, but that in each such situation there is a $300 mandatory minimum court fine, plus penalties and assessments (total owed of approximately $1,100).  Other times, if the prosecutor is especially kind, he or she may amend the complaint to allege a violation of Vehicle Code § 12500, driving without a valid license, with a small fine and one year of summary probation, but no jail.
The client then agreed with Greg to appear with him the following day in the Long Beach Superior Court.  So, the client made the long drive in from Palm Springs to Long Beach that next morning and then Greg and then client then appeared in the Long Beach Superior Court.  The primary purpose was to have the bench warrant lifted to remove it as a barrier to the client being employed.
Greg then showed the Los Angeles City Attorney the City Prosecutor the client’s valid driver’s license, which the prosecutor also found interesting that our client had somehow obtained.
In light of this, the Los Angeles City Attorney agreed to amend the complaint to allege a violation of Vehicle Code § 12500 as a misdemeanor, with no fine at all except minimal court fees ($245, consisting of a $150 restitution fee, a $40 court security fee, a $30 criminal conviction fee, a $10 citation processing fee and a $15 bench warrant recall fee).
The client was extremely pleased to avoid jail, have the bench warrant recalled and avoid any major fees.  He was especially happy that Greg Hill was able to quickly appear in court with him to have the warrant recalled so he could secure the job.
For more information about bench warrants, probation violations and driving on a suspended license, please click on the following articles:
Contact us.
Serving Torrance, Long Beach, Compton, Airport Courthouses and Other Courthouses.