In 2006, our client was arrested for felony domestic violence (Penal Code § 273.5) after his then-girlfriend called the Carson Sheriffs and reported that our client had pushed her and punched her.  Our client denied this ever happened and explained that his girlfriend was simply trying to get him arrested because he broke up with her when he found out that she was cheating on him.
Bail was set at $50,000, which our client posted through a bail bondsman with the help of his family.
The woman, now our client’s ex-girlfriend, then recanted her story to the police and stated she did not want our client prosecuted.
Our client, then age 23, was represented by the public defender’s office after the case was nonetheless filed as a misdemeanor violation of Penal Code § 273.5.  The public defender’s office was able to persuade the prosecutor to amend the complaint to add a charge of disturbing the peace (Penal Code § 415(2)), to which our client entered a no contest plea.  The charge of domestic violence was then dismissed by the prosecutor. 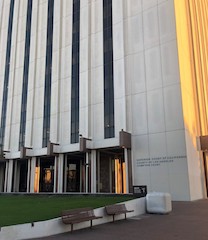 Compton Courthouse
According to the terms of the plea bargain, our client agreed to pay $551 in court fees and fine and enroll in and complete a “Level 3” anger management program.
Immediately after entering the plea bargain, our client got a job in Gilbert, Arizona and moved to Gilbert.  He paid nothing to the court and never enrolled in the anger management program.
After twelve years of working for the same employer, the client was advised by the employer that it did a background search of our client and was made aware that there was a $30,000 bench warrant outstanding for him from the Compton Superior Court in California.  The employer told our client that he would be let go if he did not resolve the bench warrant, as the employer did not want our client arrested and remanded to jail if police had contact with him for any reason.
The client then called Greg Hill & Associates and spoke with Greg Hill.  The client explained the underlying facts leading to his arrest, but was not clear on what happened in court.  Greg therefore asked for the client’s date of birth and the name he was named under in court.  Greg then went to the courthouse and obtained a copy of the case docket to clarify what happened in court and why there was a bench warrant.
Greg then secured a copy of the docket and explained to the client why there was a bench warrant outstanding and what the client could do to help the judge recall it.
The docket stated that the client owed $551 in court fees and fines and needed to complete a “Level 3” anger management program.  Greg had never heard of a “Level 3” anger management program and his research online into this failed to explain this, but the docket indicated our client had to file his proof of enrollment in such a program on a certain date and then his proof of completion of the program 12 weeks later.
Greg consequently reasoned that a “Level 3” program consisted of twelve anger management classes.  Greg suggested the client enroll in a 12-week online anger management program and give Greg proof of this, as well as $551 to pay the outstanding court fees.
Greg then went to the Compton Courthouse and asked the judge assigned to this case to recall the warrant and accept our client’s payment of the outstanding court fees.  Greg also requested – and was granted – permission for the client to meet his anger management obligation through online classes.  The judge asked what “Level 3” classes meant and Greg explained how he interpreted it, which the judge agreed with.
The judge further stated that he would recall the bench warrant, but wait until the client completed twelve anger management classes before reinstating probation and then terminating it the same day.  This meant the client would avoid having to admit a probation violation, which could later prevent him from having the conviction expunged.
Greg explained this all to the client, who was very happy with the resolution reached.
For more information about issues, please click on the following articles:
Contact us.
Serving Torrance, Long Beach, Compton, Airport Courthouses and Other Courthouses.