Los Angeles, Driving on a Suspended License, Client in NYC

Our client tried to get a driver's license in New York City, but was told he had a hold on his California license.  New York consequently refused to issue him a license.  This was a big problem for him, as his job required that he have a New York driver’s license.

In 50 Words or Less:  Client is ticketed in Downtown L.A. for driving on a suspended license, client then moves to New York, bench warrant issued in L.A. when he fails to appear in court here, bench warrant recalled and case resolved for fine and summary probation.

After researching his driving record with the DMV, however, we found an outstanding bench warrant for him arising over a criminal case here.  He had been charged five years earlier for driving with a suspended license, which is a misdemeanor violation of Vehicle Code Section 14601.1(a), which is simply driving on a suspended license (not due to a DUI).

He then had failed to appear at his arraignment in the downtown Los Angeles Metropolitan Court (1945 South Hill Street), resulting in the judge overseeing the matter issuing a bench warrant for our client.

In other words, such a license suspension follows a conviction, a conviction our client denied ever happening.

Greg called the client to ask him about this because it was possible that someone else had fraudulently used his license while he was in New York and received a conviction for 23103, 23104 or 23105.

The client then recalled that he was once stopped by police for DUI while in the downtown Los Angeles area, late at night, but was told by the police that the DUI was dropped.  This story was a bit confusing, but it could have been possible, Greg explained, for the prosecution to proceed on the DUI on a wet reckless driving charge instead, as is not uncommon.  However, the client would have been aware, most likely, of the reckless driving conviction, as he would have had been on probation, attended classes for the wet reckless, etc.  However, the client denied ever being arrested for DUI or having to go to court for a DUI or anything else while in Los Angeles. 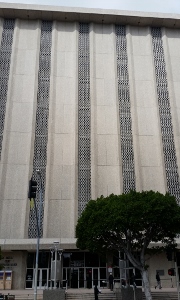 Nonetheless, Greg Hill first had the warrant lifted without having the client appear from New York, which was not difficult.

Greg Hill then negotiated a plea bargain for our client in where the client agreed to plead no contest to driving with a suspended license in exchange for three years of informal, or summary probation, a $100 fine and an assessment to the fine, which he was given twelve months to pay.  The client was more than willing to resolve the case for such a charge, although he denied knowing about it at all, because having his New York license for work was paramount.

Had our client fought his case at trial and been found guilty, or even rejected the offer made, he faced a maximum of six months in county jail (in California no less).

For more information about driving on a suspended license and a bench warrant, click on the following articles:
Contact us.
Serving Torrance, Long Beach, Compton, Airport Courthouses and Other Courthouses.