Our client, age 30 in 2004, had rented an inexpensive hotel room in Manhattan Beach for two weeks.  He was using drugs on a daily basis and unemployed.  He had received a discounted rate because the hotel was under renovation.

What to Take Away:  2004 vandalism case addressed in 2016 after our client was notified of an outstanding bench warrant for him in the case when he failed to appear at a hearing.  The case was dismissed after our client made a $500 donation to a court-run victim restitution fund.

One night, while laying in bed after using drugs, he became convinced that someone was knocking on his wall from inside a closet that had been plastered over and then wall-papered over, too.  This made sense, he thought, because the hotel was under renovation and walls were being put up in new locations.

Our client then decided he would help free this person trapped inside.  So he told the person to wait for a few minutes.

He then went out to his car and retrieved a hammer and a saw that was in his car.  He hammered on the wall until he broke through to an interior space, from which he could then saw away the wall to free the person trapped inside.  The client then did so, opening up the wall into the adjacent room, and finding no one inside.

Our client was embarrassed and believed he had been tricked.  He searched the empty room next to his for the person, but found no one.

House cleaning for the hotel reported the damaged wall to the hotel manager, who contacted the police.  Our client was then arrested for felony vandalism (Penal Code § 594(b)(1)), as the damage was well in excess of $400 to repair.  The client tried to explain that he was only trying to rescue a trapped person, but the police did not even write this in the report.

The Torrance District Attorney filed the case as a misdemeanor, quite kindly.  Our client decided to represent himself.  He dragged the case out to seven court appearances, each time asking for a dismissal because he was not trying to damage the property, but was honestly trying to rescue someone.  The prosecutor was so annoyed by his persistence, and knowing he would take the case to trial, offered him a plea to an infraction if he merely paid for the damage of about $800.

Our client was still using drugs on a daily basis and did not have $800.

Moreover, he earnestly believed a jury would find him not guilty.  The Torrance judge at the time attempted to explain that no jury would do this.  The client then became convinced that the whole court system was corrupt, so he left town for San Diego.  A bench warrant was issued when the client failed to appear at the next court appearance. 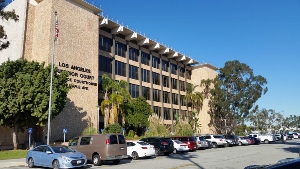 Torrance Superior Courthouse
Ten years later, the client, now 42, was applying for a job in San Diego and his employer notified him of the bench warrant in Torrance.  The client then called Greg Hill & Associates, explaining the situation.

Greg Hill listened to the client and described how he might be able to get the case dismissed based on a Serna motion, premised on the denial of the Sixth Amendment right to a speedy trial.  Greg cautioned, however, that the judge may not recall the bench warrant because twelve years had passed since the last appearance and when the bench warrant was issued.

Greg, however, did appear and the judge did recall the bench warrant.  Greg then prepared a Serna motion to dismiss the case and served it on the prosecutor.  The prosecutor, however, was aware that the client had fled the jurisdiction to San Diego, so there was an argument that our client should not be rewarded for evading the warrant.  Moreover, in the intervening years, our client had committed a DUI and domestic violence on his girlfriend.

The judge in the case read the motion and urged the prosecution to “make a deal to resolve this case.”  After two more court appearances, it was discovered that the hotel was out of business, so there was no one available to testify about the damage.  The prosecutor thus offered to simply dismiss the case if our client made a $500 donation to the court’s Victim Restitution Fund.

Very reluctantly, our client did so, happy to achieve the dismissal he originally sought, but now more sober and realistic about how valuable a dismissal was.

For more information about vandalism and restitution related to vandalism, please click on the following articles:
Contact us.
Serving Torrance, Long Beach, Compton, Airport Courthouses and Other Courthouses.