Torrance, Bench Warrant After Plea to DUI, Client in Mexico

Our client, age 32, had been arrested for a first-time DUI in Torrance in 2016.  She did not know English and was not a U.S. citizen.  She had a 0.16% BAC, both by breath and by blood.
When she went to court for her arraignment, she was told through a court interpreter that she would not have any jail time, so she eagerly entered her plea.
She then returned to Mexico, never paying a penny toward the court fine ($390, plus penalties and assessments, totaling $1,937), never enrolling in the AB762 (six-month) alcohol awareness program, never enrolling in the Mothers Against Drunk Driving (MADD) victim impact panel and never enrolling in the Hospital and Morgue (HAM) program, all of which were terms of probation she agreed to in entering her plea.
In 2019, she became pregnant and decided it would be good if her child were born in the United States, so the child could be a U.S. citizen.
She wanted to return to the United States, but she was aware that a $30,000 bench warrant was outstanding for her.  She knew that if she came across the border and was stopped at immigration, she would be taken into custody and then taken to Torrance to see a judge.  She did not want to do this while nine months pregnant. 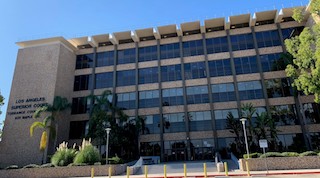 Torrance Courthouse
She called Greg Hill & Associates and spoke with our office in Spanish concerning her bench warrant and her hope of giving birth in the United States.
Greg went over to the criminal clerk’s office in Torrance and retrieved a docket report on the client’s case.  He reviewed it and advised her what the terms of her probation were, which the client had forgotten over the preceding three years.
Greg explained how he could try to have the bench warrant recalled while the client stayed in Mexico.  If Greg were successful, then the client could cross the border and not be taken into custody.
However, Greg explained how in his experience, a judge would not just recall the warrant without being assured that the defendant was acting in good faith toward fulfilling his or her obligations of probation.  Greg explained that if he had the outstanding court fees of $1,937 to pay the court, the judge most likely would recall the warrant if such a payment were made.
Greg then explained that because the client planned on returning to Mexico after giving birth, he proposed to ask the judge for permission for the client to fulfill her alcohol awareness class online through Tom Wilson Counseling, which offers California-approved DUI classes.  The client could also fulfill her Mothers Against Drunk Driving (MADD) victim impact panel obligation online through Tom Wilson, too.
For the Hospital and Morgue (HAM) program, this was not something so easily converted to an online format.  Instead, Greg told the client he would ask the judge for permission to satisfy this obligation through additional Alcoholics Anonymous (AA) meetings, which were available in Mexico.
The client then retained Greg Hill & Associates to recall the bench warrant and provided the $1,937 for Greg to offer the judge to show her good faith in fulfilling the obligations of probation.
Greg then went to the Torrance Court and had the matter added to the calendar to recall the 2016 bench warrant.  The judge was quite hesitant about recalling the bench warrant, even asking Greg, “why shouldn’t I require her to appear in person?”  Greg explained that the client was in Mexico and could not cross the border without being taken into custody.  The judge then told Greg to come back to his department in the afternoon.
This particular Torrance judge had a reputation for making all attorneys uncomfortable, so Greg was concerned, but not overly worried about what would happen in the afternoon.
That afternoon, the judge’s demeanor had improved considerably.  He recalled the bench warrant and reinstated our client on probation, with probation to end in two years.  This in itself meant our client had reduced her probation by a whole year.
He then had Greg pay the outstanding court fees, gave the client approval to take the online DUI program, as well as the online MADD program and converted the HAM program to 26 AA meetings.
This was everything the client wanted, although the judge certainly made it rough.
For more information about bench warrants, please click on the following articles:
Contact us.
Serving Torrance, Long Beach, Compton, Airport Courthouses and Other Courthouses.