This is quite common here in the Los Angeles area, as many folks are taken into custody while passing through customs at LAX.  The immigration / Homeland Security / customs officer will ask the person to step aside into a side room, where the person will be advised that a warrant of some type exists for that person in, for example, Wheeling, West Virginia, over a case ten or even twenty years ago.

This experience can be extremely disconcerting, as the international traveler may not have been aware that there was a bench warrant outstanding, or worse yet, the person may have traveled through customs.

When this happens, the immigration, customs or Homeland Security officer will notify the other state or county within California that your loved one is in custody.  The other state will then decide whether they wish to spend the time and money to bring the person back to their state.  California follows the Uniform Criminal Extradition Act, which obligates California to honor a request for extradition even if the demanding state has not enacted similar provisions to honor a reciprocal request from California. 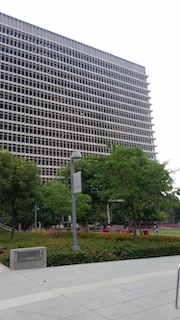 Clara Shortridge Foltz CCB
California, considered the “asylum state,” will then have a prosecutor file a “fugitive complaint” against the suspect for an extradition hearing, under Penal Code § 155.1.  The suspect is then arraigned and held in custody or allowed bail according to the discretion of the state seeking the fugitive.

In response to the complaint filed in California, the fugitive can either deny the allegations in the complaint (i.e. that he or she is not the wanted person, that the warrant is improper or his or her arrest was improper) or waive extradition.

In addition to formal extradition, there are several other forms of interstate rendition.  The Uniform Interstate Family Support Act (Family Code §§ 4900-5005) provides a means by which a person may be compelled to abide by his or her support obligation, including involuntary removal to a state where he or she may be charged with criminal nonsupport.

In addition, the Interstate Compact for Adult Offender Supervision (Penal Code §§ 11180-11181) provides an administrative procedure for the return of probationers and parolees who are under another state’s supervision.

Lastly, the Agreement on Detainers (Penal Code §§ 1389-1389.8, also called the Interstate Agreement on Detainers) is an interstate agreement that provides for the administrative transfer of prisoners from one jurisdiction to another jurisdiction that has criminal charges pending against the prisoner.  Its basic purpose is to protect the speedy trial rights of both the prisoner and the prosecutor and to dispose of detainers to minimize disruption on the prisoner’s rehabilitation.