Home
Other Information
Criminal Defense Articles
What Is a Motion to Quash a Warrant & Suppress Evidence?

What Is a Motion to Quash a Warrant & Suppress Evidence?

Under California Penal Code § 1538.5(a)(1), a defendant may challenge the lawfulness of a search warrant and to suppress evidence that was gathered as a consequence.  This motion is often called a motion to “traverse” the warrant or controvert it, often on its face and/or through supporting declarations that point out how the affidavit supporting the warrant was false or insufficient.  The motion is often also called a “Franks’ motion after the famous U.S. Supreme Court case Franks v. Delaware.

In a Nutshell:  A motion to quash a warrant and suppress evidence is a request that the judge find a warrant was improperly obtained and therefore any search in reliance on the warrant was illegal, which renders any evidence found in the search inadmissible.  If certain evidence cannot be admitted, a case may be dismissed.

The motion asks a judge to quash a search warrant (not bench or arrest warrant) when the magistrate issuing the warrant or the officer conducting the search knew or should have known that the affidavit supporting the “exploratory” warrant was simply not true in material ways, or a fabrication with the ulterior purpose to gain access improperly to a house, business or computer when a lawful request was impossible.

The results of such a mistake by the magistrate or officer is a search and seizure that was unreasonable and thus a violation of the Fourth, Fifth and Fourteenth Amendments of the U.S. Constitution, made applicable to the states through the Eleventh Amendment. 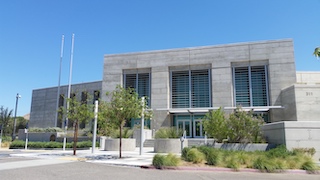 Banning Courthouse
The request to quash such a search warrant should also argue that a reasonable and well-trained officer would have known that the affidavit failed to establish probable cause, would not have acted with reckless disregard for the truth, would not have ignored that the magistrate had abandoned his or her judicial neutrality, and would not have applied for a warrant.

Lastly, the request should, if applicable, argue that the affidavit supporting the warrant was so factually deficient that a reasonable officer could not have had a good faith belief in its sufficiency or that the officer should have known or did know the information in the affidavit for the warrant was false or insufficient. U.S. v. Leon (1984) 468 U.S. 897, 104 S. Ct. 3405; People v. Camarealla (1991) 54 Cal.3d 592, 602.

Alternatively, such a motion to quash a warrant may argue that the place to be searched or the property to be seized was not described with sufficient particularity in the warrant.  We find this is often an issue, as warrants have broad, ambiguous language that it seems, no one really reads, such as “any and all items that do or may show use of illegal drugs.”

The motion should tell the judge “with some specificity, reasons for contending that the affidavit is inaccurate.”  Theodor v. Superior Court (1972) 8 Cal.3d 77, 103; People v. Cooks (1983) 141 Cal.3d 224, 295.  Such factual reasons necessarily will be presented in the form of a declaration attached to the motion.  Defendant usually then subpoenas such witnesses to the hearing on the motion.

The court must then find that, if such false statements are deleted from the affidavit for the warrant, or if the material omissions are cured, that what remains fails to establish sufficient probable cause to issue the warrant. People v. Luttenberger (1990) 50 Cal.3d 1.  This is the key concept in filing such a motion.

This type of motion is unusual in that defendant can request court permission to file a supplemental memorandum after the hearing on the motion to address the testimony of the police officer and the prosecutor’s arguments.

As the reader of this article hopefully realizes, this is a tough type of motion to prepare.  It must be done carefully and precisely.  It is not a do-it-yourself type of motion for a non-attorney to prepare, file, serve and argue.