Please click on the case summaries below to read a detailed description of our elder abuse cases.

Defending charges of elder abuse, as the above summaries reflect, can require juggling multiple issues, the most important of which may be simply mastering the facts.The victim (an “elder” is defined as age 65 or greater) may have passed away or be so vulnerable, possibly due to effects of Alzheimer’s or heavy medication that obtaining a reliable, accurate description of events may have been impossible for the police.Other times, the victim has physical ailments, such as bed sores or areas of dead skin, which would have been caused regardless of our client’s conduct, but police blame our client for such conditions.

In such cases, a medical expert may be necessary to give his or her opinion on the causation of the ailments.

Our client may also be accused of financial elder abuse under Penal Code § 368(d) (and California Probate Code § 859), wherein the client is accused of using undue influence (defined at Welfare & Institutions Code § 15610.70 and California Civil Code §§ 1575, 3345) or misusing a position of trust, either as a family member, fiduciary, health care worker, spiritual adviser (including from a legitimate, recognized church) or even, we have seen, an affectionate dancing instructor that flattered the victim.This abuse can manifest itself in theft of assets, property or forging signatures on land titles (a form of forgery under Penal Code § 470 and identity theft under Penal Code § 530.5).It can also take the form of embezzlement (Penal Code § 503).

In such cases, a forensic financial expert may be necessary to untangle a series of transactions that police attribute to our client, but may not be related to our client at all.

Sometimes, the charges are clearly brought by someone with an ulterior motive, such as someone vying for an inheritance or competing for the trust of the elder person.In such cases, our client is innocent and is falsely accused, so it is important in such cases to fully appreciate the motives and background of the accuser, which can be difficult to understand and even more difficult to persuade the prosecutor to investigate.

The punishment for a violation of Penal Code § 368(d) is either a maximum of one year in county jail, or, if brought as a felony, up to four years in state prison (usually to be served in county jail under AB109), plus restitution.Restitution is usually the biggest issue or challenge in the case, as the amount to be repaid can be enormous and the embezzled funds may have been spent and unrecoverable.Such exposure to jail or prison is often not dependent only upon the 368(d) charge, as other charges such as forgery, identity theft and embezzlement may also be involved that add time to the sentence. 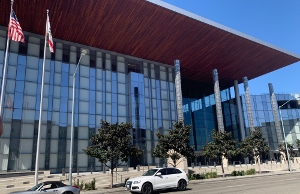 Long Beach Superior Courthouse
Sometimes, when the accused is alleged to have misappropriated money in a bank account, the prosecutor may charge our client with grand theft of social security benefits, too, which can involve a U.S. Attorney and not just a local prosecutor.

It merits mention that a course of conduct that results in multiple small thefts can be charged as one offense or separate offenses.The decision on how to charge this depends upon the totality of the circumstances, including the suspect’s prior criminal record, the proximity in time between the takings, the size of the thefts and the damage to the victim.