Our client, age 66, lived with her husband in Lomita.  She had cared for her mom for decades, ever since her mom became a widow.  However, her mom was in remarkable good physical shape for her age, spending hours each day gardening.  She was also mentally sharp, showing very little, if any, slowdown or any signs of dementia or Alzheimer symptoms.  She had stopped driving, however, in her seventies.
While she was in physically great shape for her age and mentally sharp, she incessantly lectured her daughter about her personal life.  She nagged her every chance she had.
One day, while our client was taking her mom to the doctor for a routine visit, her mom again began lecturing her about her personal life.  Our client was driving and her mom was in the rear seat area. In response to the nagging, our client grabbed her own purse and swung it back towards her mom, striking her in her arms.
This battery did not stop the mom from continuing to lecture our client as she walked with her to the doctor’s office.  In frustration, our client yanked on her mom’s hair, pulling her down.
As is not uncommon with older folks, her skin was very thin and she bruised immediately on her arms.  The doctor noticed this bruising on the mom’s arms and asked her how she received such bruising.  The mom immediately explained how her daughter had just recently hit her with her purse and then pulled her hair during the walk into the office.
The doctor, as a mandatory reporter of child abuse, domestic violence and elder abuse, immediately reported his observations to the Lomita Sheriff’s after our client and her mom left the office. 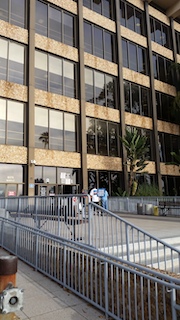 Torrance Courthouse
The Lomita Sheriffs first interviewed the elderly mom, who repeated her explanation for her bruising and exhibited new areas of purple skin on her scalp, where her hair had been pulled.
The Lomita Sheriffs then spoke with our client, who explained that her mom had a long, long history of nagging her over her personal life and that her mom had abused her as a child.  Our client openly admitted to using her purse as a weapon and confirming her mother’s story.  Our client was not arrested.  She had no prior criminal history at age 66.
The Lomita Sheriffs then prepared a police report and recommended prosecution of our client by the Los Angeles County District Attorney’s Office.
The Torrance District Attorney’s Office agreed and filed a misdemeanor complaint for elder abuse (Penal Code § 368(c)), against our client.  The office mailed our client a letter, instructing her to report to the Torrance Courthouse by a certain date.
The client and her husband called Greg Hill & Associates about the letter, alarmed that a criminal complaint for elder abuse was filed and defensive that the mom was such a constant nagger that anyone in our client’s shoes would have done the same thing, or worse.
The client and her husband then met with Greg Hill and further explained how the victim was the most obnoxious, rude and condescending person and had always been unappreciative and never shy about telling her daughter what a loser she was.  The two truly despised our client’s mom and even had one of her sons corroborate this in a letter about how insensitive and abrasive the mom could be to her children.
Greg and the client discussed how the case would be prosecuted and Greg suggested that the client enroll in and begin taking batterer’s classes, which our client immediately did at the rate of one per week.
Greg then appeared at the Torrance Superior Court with the client for her arraignment.  While the case was filed as a misdemeanor, the client had to appear at the arraignment with Greg so the judge could issue and then have the client served with a protective order barring any contact between our client and her mom, as the victim in the case.
Over the course of four months, Greg was able to negotiate the case from thirty days in county jail to no jail, but diversion was denied for the client because the mom was adamant that her daughter be punished.  The assigned District Attorney on the case spoke with the mom several times and advised that the mom was eager to testify in trial “to teach her daughter a lesson.”
The case was eventually resolved, but the client did enter a no contest plea to misdemeanor elder abuse under Penal Code § 368(c), and was required to attend 52 batterers classes, perform eight hours of community service, make a $500 donation to a battered women’s shelter and pay court fees and fines totaling $220.  The client was also required to stay away from her mom for the term of informal (also called summary) probation, three years.
It was a surprising end to a case that our office did not expect.  We had anticipated that the mom would have mellowed in her anger toward her daughter, something even the prosecutor found unanticipated.
For more information about elder abuse issues, please click on the following articles:
Contact us.
Serving Torrance, Long Beach, Compton, Airport Courthouses and Other Courthouses.