Home
Other Information
Criminal Defense Articles
What Is Involved and Needed in a Civil Case for Elder Abuse?

What Is Involved and Needed in a Civil Case for Elder Abuse?

Our office has defended many people accused of criminal elder abuse, but for each person we have defended of criminal charges, we receive ten phone calls asking us if we can handle a civil case for elder abuse.

About This Article Briefly: While our office does not file civil cases for elder abuse, we receive so many phone calls about this topic that we provide this article to help one understand the topic.  This article may also help someone who is a criminal defendant for elder abuse know what he or she could face in civil court.

The following article is written for such people, whose cases are civil in nature and often not financially practical for anyone to take.

California Welfare and Institutions Code § 15600, et seq., is known as the Elder Abuse and Dependent Adult Civil Protections Act, is a very broad-ranging piece of legislation, passed 35 years ago in 1982.  It encompasses financial abuse, physical abuse, abduction and neglect.  Neglect is the most common area of a claim.  Most attorneys are keenly aware of its enhanced damages provisions, at Welfare & Institutions Code §§ 15657, 15610.63 and 15610.57, as are the general public, who often believe civil litigation attorneys are eager to file such cases for this reason alone. 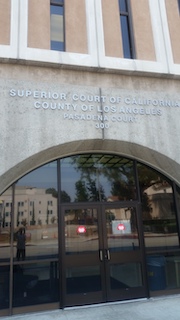 Pasadena Courthouse
Who is considered an elderly person under the statute?  The answer is anyone 65 years old and older.  However, if an adult is considered a dependent adult, the act can apply to him or her if less than 65.  A “dependent adult” is anyone between 18 and 64 who has physical and mental limitations that restrict his or her ability to carry out normal activities and to protect his or her rights.

A fundamental concept that must be understood (and often is not), is that a defendant in a civil elder abuse or “dependent adult” cause of action can only be someone who has care or custody of the elderly or dependent adult.  Winn v. Pioneer Medical Group (2016) 63 Cal.4th 148.  In Winn, plaintiff tried to sue an outpatient medical care provider under the Elder Abuse Act.  The California Supreme Court focused on the “care or custody” requirement and found that the outpatient care facility had not truly accepted full and total responsibility for the basic needs of an elder or dependent adult.  There was not a sufficient “bond” with the victim, such as providing nutrition, hydration and medication, or put another way, needs that an able-bodied and fully competent adult would ordinarily be capable of handling on his or her own.

Abduction is a surprisingly common claim, especially when a well-meaning (or devious) family member seeks to move an elderly or dependent adult into the home of that family member to more closely supervise and care for the person.  “Abduction” is defined by Welfare and Institutions Code § 15610.06 as removing the victim from California or restraining the victim from returning to California.

Financial elder abuse occurs when defendant takes advantage of an elder or dependent adult by taking, hiding, appropriating, obtaining or retaining plaintiff’s property or assisted in doing so.  The action must be completed with the intent to defraud or done with wrongful influence, often in the form of a new will, trust or agreement.  Financial elder abuse is the most common form of a criminal action for elder abuse.

Neglect is the most common civil form of an elder abuse claim.  It is based on negligence, meaning defendant failed to use the degree of care that a reasonable person in the same situation would have used in the provision of food, clothing or shelter, providing medical care or mental health needs.

To proceed with such a potential claim, our office recommends that one contact an experienced civil litigation attorney who specializes in elder abuse claims and who has navigated around MICRA and the civil courts handling such claims.

For more information about both civil and criminal elder abuse issues, please click on the following articles:
Contact us.
Serving Torrance, Long Beach, Compton, Airport Courthouses and Other Courthouses.