Our client, age 48, was a certified nurse assistant and working at a Long Beach residential adult treatment facility.  Many of the residents were elderly and suffering from a lifetime of mental illness.  Most were peaceful and treated with a daily regimen of medication that controlled their behavior.

There were several patients, however, who were difficult at times.  One particular patient was nearing 80 and very disruptive.  He had a lifetime of violent, unpredictable behavior.  While our client was doing her rounds, this particular older male tried to punch our client.  In self-defense, our client pushed the older gentleman back and then she left the room to report the incident.

What to Take Away:  Certified Nurse Assistant charged with several charges involving elder abuse of a patient in Long Beach Superior Court.  Convictions for even one of the charges would have a devastating effect on her CNA license.  Case resolved for a delayed entry of plea, which saved her license.

That was the full extent of the interaction.  However, the other employees heard the commotion, as the older patient screamed loudly.  The other employees did not like our client, so they realized this incident would necessarily involve witness accounts of who did what.

When the Department of Justice, Bureau of Medi-Cal Fraud and Elder Abuse, came to the facility to investigate, our client’s colleagues told a tale of quite a fight.  They reported that they all saw our client throw a clipboard at the elder gentleman and kick him.  The elder gentleman’s account of the incident was wildly inconsistent, as he was indeed mentally ill.

All of these counts were misdemeanors, however, a conviction for any one would have a devastating effect on her license.

Our client was shocked by the complaint.  She regarded it as an endorsement of a mentally ill man’s claims as having more credibility than a sane person.  However, she suspected that her colleagues had offered witness statements that corroborated the mentally ill man’s accounts.

The client then called Greg Hill & Associates and spoke to Greg Hill.  She described the various personalities of the treatment facility.  She explained what had really taken place and what she thought her colleagues may have claimed to investigators.

Greg discussed the various ways the case might be prosecuted and how his prior cases with the Department of Justice Elder Abuse unit had been resolved.  Greg told the client that he would try to resolve the case for a delayed entry of plea, but that this could be difficult.

To increase the chances that the prosecutor would consider this seriously (but not because he thought the client needed this), Greg recommended that the client immediately enroll in and begin taking an anger management class.  He explained that was purely to get traction in the negotiation process.  Greg then gave the client a listing of the court-approved classes that the client may want to look into and enroll in one.

The client followed Greg’s advice.  She gave him proof of having attended three such classes by the arraignment.  Greg then did appear at the arraignment and spoke with the Assistant Attorney General assigned to the case.

The prosecutor’s first offer involved a plea to two counts, three years of informal probation and 90 days in county jail, as well as $300 in fines and an obligation to take 52 anger management classes once the client finished her jail term.  The reasoning was that our client had taken advantage of a vulnerable, weaker, elderly man.

Greg then prepared a Defense Position Letter with a fuller explanation of events and the personality conflicts present in the care facility.  He explained our client’s progress in anger management classes and how the other employees could never have seen the incident, but were obviously fabricating their descriptions due to a vendetta to vex our client.  Greg proposed resolving the case via a delayed entry of plea, with our client attending 20 anger management classes and performing 40 hours of community service – and if she did this, the prosecutor would dismiss the case. 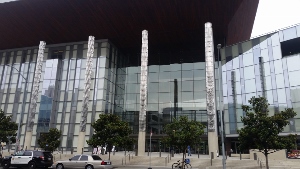 Long Beach Superior Courthouse
The Assistant Attorney General read the letter and investigated further.  Two months passed before she responded.  Surprisingly, she agreed with the proposed disposition Greg had suggested.  Our client had already done 7 anger management classes to date.

She then did thirteen more and performed 40 hours of community management.  Greg then returned to court about three months later and showed documentary proof of this to the prosecutor, who, good to her word, did dismiss the complaint.

This would help our client in keeping her certified nurse’s assistant license and prevented a conviction of any kind.  The client was very happy.