Our client, age 35, was returning home to Sherman Oaks after attending a Lakers game at the Staples Center.  He had consumed one large beer at the game and then afterwards, went to a local bar and had two smaller beers with friends.  He stayed at the bar until it closed at 2:00 a.m., then lingered outside with his friends, continuing to talk.
He was driving his 2012 Toyota Camry, that he had just bought at a used car dealer.  The car had “paper plate,” which were exceptionally durable, sturdy cardboard.  The DMV was going to mail him the actual license plates.
He had driven from the Staples Center area first north on the Harbor (I-110) Freeway, then northwest on the 101 toward Hollywood and the Valley.  He then transitioned onto the westbound 101 toward Sherman Oaks.
It was about 2:35 a.m. when he noticed the pink and blue flashing lights in his rear-view mirror.  Our client had two earlier convictions for DUI nine and a half years ago and another just under10 years ago, so being pulled over unfortunately was not a new experience.  He pulled off at the Woodman exit.
According to the CHP report received after the client retained our firm, the officer pulled over our client for violation of Vehicle Code § 5200(a), failure to have two license plates on his car, which the officer believed was a correct reason because he observed “paper plates.”  However, in our research of the DMV website on this issue, we found that the cardboard plates our client had on his car were proper for 90 days after he purchased the used car.
In this case, our client had such plates on his car over 90 days, but the officer never addressed the length of time our client had such plates on his car.  Instead, his first questions to our client went straight to his hunch that our client was DUI, although the police report described nothing that suggested any physical impairment in his driving, i.e. lane straddling, speeding, swerving between two lanes or even within one’s own lane. 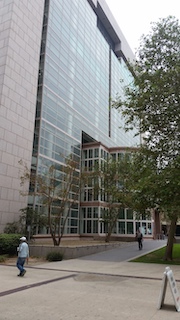 Van Nuys Courthouse
Instead, the officer seemed to believe our client may be drunk just because it was 2:30 a.m., right after all the bars had closed.
Our client knew from experience not to argue with the police or challenge the officer’s authority.
Our client submitted to a roadside preliminary alcohol screening (PAS) test, which measured his breath alcohol content at 0.098% and 0.103% blood alcohol content (BAC).  Our client also underwent some field sobriety tests that even an Olympic gymnast would probably fail, at least according to an officer who had determined already that he would make an arrest for DUI.
At the CHP station, our client submitted to a second breath test and his breath alcohol measured 0.093% and 0.090%.
The client called Greg Hill & Associates and spoke with Greg.  He was genuinely concerned that this DUI would be filed as a third-time DUI and he would face a minimum of 120 days in county jail.
Greg explained that the date of the arrest was the controlling date, not the conviction, and so the client then told Greg when the arrests were for each of his two earlier DUI that led to convictions less than ten years ago.  Both prior arrests were more than ten years ago, so Greg assured the client that the pending DUI would be a “first-time” DUI only.  This greatly relieved the client.
Greg and the client then discussed the reason for the traffic stop and how the officer should have first and foremost simply asked the client when he bought the used car, but never did.  Greg explained how a motion to suppress on the evidence obtained would not be advisable because the true date our client obtained the car was outside the 90 days, but the officer’s apparently pre-textual reason for the stop was still problematic.
Greg then described his plan for nonetheless reviewing the MVARS (mobile video audio recording system) tape and the CHP report, but that with such a low BAC, a resolution as wet reckless would be certainly on the table, although it was likely that the Los Angeles City Attorney assigned to the case would “push back” quite a bit because the client had three DUI arrests within eleven years.
Greg then appeared in the Van Nuys Superior Court and over the course of three hearings, finally did resolve the case as a wet reckless (Vehicle Code § 23103 pursuant to Vehicle Code § 23103.5) with the DUI being dismissed.  The client was obligated to three years of informal probation, with an order to enroll in and complete the three-month alcohol awareness program (AB 541), pay a court fine of $390 plus penalties and assessments and attend the Mothers Against Drunk Driving victim impact panel.
The client was very happy with this resolution.
For more information about DUI in general, please click on the following articles:
Contact us.
Serving Torrance, Long Beach, Compton, Airport Courthouses and Other Courthouses.