In a Nutshell:  Client convicted in the Torrance Courthouse in 1975, while 18 years old, of cultivating marijuana and sales of marijuana, both then felonies.  Forty-three years later in 2018, he wants to become a registered nurse, so he wants the convictions expunged.  Our office attempted to find the court file, but only a small part of it could be recovered.  Nonetheless and despite the client having violated probation several times, our petition for dismissal (expungement) was granted, making the client very happy.

It merits mention that 11358(c), a person over 18 who plants, cultivates, harvests, dries or processes over six living cannabis plants is now a misdemeanor punishable by up to six months in county jail or a fine of up to $500, or both.  There are certain excepts to this that can make it a felony, but they would not apply in this case.
Nowadays, a violation of Health & Safety Code § 11359 is a misdemeanor, too, also subject to a few exceptions that did not apply here.
The client violated formal probation several times, including by failing to report to his probation officer and even being apprehended in Florida.  However, he eventually finished probation in 1980. 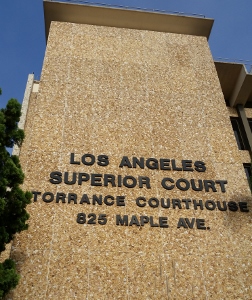 Torrance Superior Courthouse
He thereafter developed a photography business and had a successful studio in Southern California for almost three decades before moving to Utah in 2011 with his wife.
The client then discovered that his true passion was to become a nurse, so he entered into a nursing program in Utah.  He loved the classes and was excited to become a registered nurse one day.  However, before he could complete the program, he learned in 2017 that he would be not be able to complete clinical training in a hospital because of his conviction from Torrance 42 years earlier.
The client then called our office, asking about expungement of the 1975 convictions.  Our office told him that we would first need to ensure he did successfully complete probation, as the client was unsure if this happened.
Our office first went to the Torrance Superior Court clerk’s office to request a docket report on the case.  In our experience, with older cases, the clerk’s office often can print out a record from a microfiche file, although this may take a few days or even weeks to find the file.  In our client’s case, however, the clerk’s office advised that they did not even have such a microfiche file or even anything on record about our client.  However, the clerk suggested that our office make a visit to the county archives in Downtown Los Angeles (near the Clara Shortridge Foltz building) to find a hard copy of the file.
Greg Hill then went to the Los Angeles County archives to request copies of the file.  The archives did possess the file, which Greg was able to review and photocopy via a microfiche machine.  The file did indicate that our client successfully completed probation, so the client was eligible for relief under Penal Code § 1203.4.
Greg happily advised the client in Utah that his file had been found at the archives and that our office would next be preparing the petition for dismissal under 1203.4, filing it, serving it and hoping for a favorable ruling.
Our office then did prepare the petition, filed it and served it to the Torrance District Attorney’s office.  Due to the age of the file, the expungement clerk in Torrance and the judge there handling this petition did take about two months to rule on it, but it was worth it, as the judge granted the expungement.
Our client, now 61, was very pleased to receive the good news, as he could now continue with his nursing education and strive toward his goal of one day become a registered nurse.