Our client, then age 40, was convicted in 2015 of felony domestic violence under Penal Code § 273.5.  It was an especially brutal incident, bordering on spousal rape, wherein our client, angry at his wife for not buying food for his daughter, returned home from drinking and pinned down his wife in their bed for 30 minutes, threatening to “f&*#( her like a horse” and “to show you who’s the boss in this house.”
The commotion finally got the attention of neighbors, who called the Gardena Police Department, who arrived only to find our client passed out in the bed and smelling of alcohol.  The Gardena Police Department was somewhat familiar with our client, as he had been arrested for DUI three times in Gardena and convicted each time.  He also had each conviction expunged.
The client’s wife was asked what had happened and explained to police that her husband had returned home after a night of drinking about 1:00 a.m.  He was angry at her, but would not explain what was making him so upset.  He woke up his wife and told her she was “nothing but a bit)#*#” and that she needed to know he was the boss of the home. 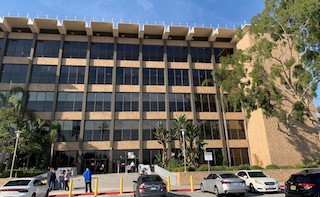 Torrance Courthouse
To demonstrate this to her, he explained he was going to rape her.  He covered her mouth with one hand while pulling off her panties with his other hand.  He sat above her on her back, with his knees holding down her elbow.  His wife began to cry.  This only emboldened him further, apparently confirming to her that he was “the boss.”
He ordered his wife to spread her legs, but she refused, so he slapped her across the face several times.  She was crying and yelling “no.”  He was naked.  This when the neighbors called the police.
Our client eventually passed out in the bed from the struggle, never penetrating his wife.
Police described the horrific event in a police report that went on for pages of narrative.  Our client eventually entered a plea bargain for violating Penal Code § 273.5(a) and was placed on five years of formal probation, conditioned upon him serving 30 days in county jail, attending the court-approved batterers program, 52 Alcoholics Anonymous (AA) meetings, performing forty hours of approved community service and paying court fees and fines totaling close to $1,200.
Four years later, our client himself asked the judge for early termination of probation and the judge, impressed with the client’s apparent change in attitude and new maturity granted the motion at about 3.5 years into probation.
The client was still married to the same woman (she did not divorce him) and had been religiously attending AA meetings for several years, as well as marriage counseling.  He was working for a government agency (whose identity will remain anonymous for this summary) and was applying for his teaching credential.
The client knew with a felony on his record, he would be most likely denied his teaching credential, or at least the process toward receiving it would be difficult, so he contacted Greg Hill about reducing the felony to a misdemeanor under Penal Code § 17(b)(3) and expungement.
Greg explained that a judge may find the nature of the event leading to the conviction was truly felony in nature and deny the motion.  Greg explained the facts of prior cases wherein he had been successful in persuading a judge to reclassify a felony as a misdemeanor and how such facts paled in comparison to the facts of his case.  Greg further explained that while the client’s professional challenges and continued marriage were considerations, the number one focus would be on the nature of the crime.
The client said he appreciated Greg’s honesty and told him many other attorneys had promised him a reduction, but they just seemed interested in their fee.  The told him the reduction was a “slam dunk,” but charged a much higher fee than Greg quoted.
The client retained Greg Hill & Associates and Greg then prepared the petition for dismissal (expungement) with a simultaneous request that the judge reduce the felony conviction to a misdemeanor.  The petition was filed in the Torrance courthouse.
At the hearing on the motion, the District Attorney opposed the reduction of the felony to a misdemeanor, arguing that the conduct was “clearly felony in nature” and how it was remarkable that our client’s plea bargain included so little county jail.  The District Attorney was emotional about how our client “savagely” beat his wife, threatened to rape her and was about to do so, but passed out in the bed during his rage due to his high intoxication level.
The judge agreed that the facts of the case were not misdemeanor in nature, so he denied the 17(b)(3) motion, but he did grant expungement.
We offer this summary to the reader to show the limits of Penal Code § 17(b)(3).  Not all “wobblers,” while eligible for reduction from a felony to a misdemeanor, qualify for such a reduction.  When the facts are bad, a judge will recognize this and may deny the motion, as took place here.  While our client’s post-conviction efforts at rehabilitation were exemplary, they did not change the underlying facts and the judge was not willing to reclassify the conviction as a misdemeanor.
For more information about 17(b) (reduction of a felony to a misdemeanor) issues, please click on the following articles:
Contact us.
Serving Torrance, Long Beach, Compton, Airport Courthouses and Other Courthouses.