The following case summary is intended for the reader as a cautionary tale, as often a potential client has several arrests for domestic violence, child abuse and/or elder abuse and is quite eager to have all such arrests and/or court documents sealed due to employment or housing issues.

The above scenario certainly applied to our client, age 54, from Rancho Palos Verdes, who contacted us about sealing two police reports and the court files associated therewith involving allegations of elder abuse by her against her parents.

The story leading to the arrest at issue is that in November, 2016, our client was investigated over multiple complaints made to the Lomita Sheriff’s Department for alleged elder abuse at her home, which she shared with her parents in Rancho Palos Verdes.  She was not arrested by the deputies; however, her parents were directed to secure a restraining order against our client.

In February, 2017, our client, then 52, was arrested by the Lomita Sheriff’s Department after she returned to her parent’s home to locate a suit for court on an elder abuse case she faced for violation of Penal Code § 368(c) in Torrance Superior Court.  The sheriff’s department was at the home when she arrived and the deputies arrested her for allegedly violating a restraining order and trespassing (Penal Code §§ 166(a)(4) and 602(o), respectively).  She was then taken to court for her court appearance and bail was set higher than our client could post. 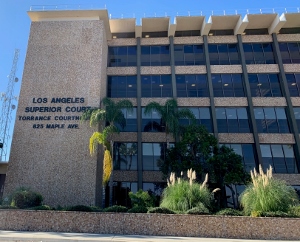 Moreover, during the course of the trespassing and violating of a restraining order case, our client’s public defender declared a doubt under Penal Code § 1368 and our client was remanded into custody.  She then spent over 100 days in custody in the Los Angeles County Jail, which with “Good Time, Work Time” credit (Penal Code § 4019), meant she had already served more time than she possibly could be sentenced to serve.

The client then came to Greg Hill & Associates seeking an order to seal and destroy her arrest record, the police report and the court files for both cases.  Greg spoke with the client and explained that under Penal Code § 851.91(a), “a person who has suffered an arrest that did not result in a conviction may petition the court to have his or her arrest and related records sealed, as described in Section 851.92.”

The client had worked hard to move forward with her life after the arrest and case filing, however she found it difficult, if not impossible, to find a full-time job with an income that would allow her to financially support herself due to the cases being filed, even though both were ultimately dismissed.  For the past two years, she had applied for several full-time jobs, including with GAP, and each time the companies learn of her arrests, she never heard from them again.  These arrests were causing a crippling impact on her professional life.

For the past nine months, the client had been working part-time at a mortuary, where she worked as an assistant.  The part-time income made it very difficult for her to live on her own.  She had moved in with her elderly aunt and uncle in the area.  While she was grateful that she had family members she could rely on for a roof over her head, the living quarters were small and inconvenient.  She did not want to burden her aunt and uncle any longer.

Our office thus filed separate petitions for sealing and destroying the arrest records and court files in each case.

The prosecution quickly pointed out in opposition that our client had been arrested five times for a variety of things, but each time the arrest was at her parents’ home and while not each arrest was for elder abuse, the victim was her parents.

The judge in Torrance hearing both petitions requested supplemental briefing on the issue and thus, our office filed a supplemental memorandum concerning the issue of whether the client’s petition is barred due to a “pattern of elder abuse” as defined under Penal Code § 851.91(c)(2)(A)(III)(ii).  Under this code section, it is stated that:

(ii) for purposes of this subparagraph, “pattern” means two or more convictions or five more arrests, for separate offenses occurring on separate occasions with three years from at least one of the other convictions or arrests.

Here, our client simply did not have two or more convictions or five or more arrests for elder abuse, so a “pattern of elder abuse” did not apply to bar the judge from granting her petition.

The judge thus denied both petitions.  We offer this summary, as stated above, as a cautionary tale about how the exceptions to this law are applied, at least by one judge.  In other words, it is wise to appreciate that such exceptions are not viewed strictly, but broadly (as in this case), much to our client’s disappointment.
For more information about sealing a police record and court file, please click on the following articles:
Contact us.