Home
Other Information
Criminal Defense Articles
How to Seal an Arrest Record under Penal Code § 851.87

In a Nutshell:  Sealing an arrest report under Penal Code § 851.87 is not available for everyone ever arrested.  There are many requirements and restrictions, as the following article explains. 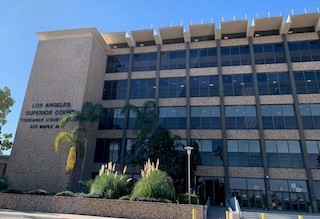 Torrance Courthouse
A conviction that was “expunged” under Penal Code § 1203.4 is not later eligible for sealing under Penal Code § 851.87 because at one time, the arrest had resulted in a conviction.
There are exceptions to relief under § 851.87 for certain types of arrests, such as those for domestic violence (Penal Code §§ 243(e)(1) or 273.5), child abuse (Penal Code §§ 273a or 273(d)) or elder abuse (Penal Code § 368) when there is a pattern of arrests.  Even if one has suffered an arrest for such alleged conduct, the judge can nonetheless order the arrest sealed “in the interest of justice” under appropriate conditions that must be explained based on the specific circumstances of the arrest or the consequence.
To have an arrest record sealed means the record of being arrested will not appear in most criminal background checks.  The word “most” is meant to distinguish a background check initiated by law enforcement when one is detained or arrested, when one applies for a job or while one is employed by law enforcement, in which the arrest will still appear.  The arrest should not appear when one’s employer performs a background search, unless one is employed in law enforcement.
In other words, Penal Code § 851.87 is a powerful tool for one to “bury” an embarrassing arrest, perhaps for solicitation of prostitution (Penal Code § 647(b)), indecent exposure (Penal Code § 314) or DUI (Vehicle Code § 23152), for example, that never resulted in a case being filed or a conviction.  This can help one gain a job or a promotion, rent an apartment, get a loan, volunteer at the school of one’s child, gain a professional license with the state of California or even to pass the background check of a potential spouse / girlfriend / boyfriend.
More specifically, Penal Code § 1001.33(a) states, “The divertee [the person who was placed on diversion and completed it successfully] may indicate in response to any question concerning his or her prior criminal record that he or she was not arrested or diverted for the offense, except if applying for a job in law enforcement.  A record pertaining to an arrest resulting in successful completion of a diversion program shall not, without the divertee's consent, be used in any way that could result in the denial of any employment, benefit, license, or certificate.”
For more information about sealing a case or a record in other contexts, please click on the following articles:
Contact us.