The charges arose over an incident when police tried to make a routine traffic stop of our client (allegedly) for a burned out tail light.  It was about midnight and our client had been drinking.  He had recently been beat up by the cops, so when he saw the red and blue lights flashing in his rear-view mirror, he decided to push the car’s accelerator to the floor and speed away.

The Main Point of This Summary: Asking a judge for early termination of probation must be done carefully, especially when probation is for a conviction that involves domestic violence, any type of sex offense or conduct wherein a government employee is a victim or involved.  In the following evading arrest case out of the Torrance Court, we were successful in having a judge end probation early when our client was experiencing employment ceilings due to his probationer status.

After only about 100 yards of doing this, he had second thoughts and decided to stop.  Officers were extremely angry at him for this momentary contemplation of an escape.  They immediately recognized him once they pulled him over.

The officers also allegedly smelled the odor of alcohol, but oddly did not decide to proceed with a DUI investigation.  It was as if they were strangely rewarding our client for his choice to stop.

However, they did give him a ticket for evading arrest, reckless driving and resisting a government official.  He signed a promise to appear in the Torrance Court on the ticket and was told to “have a good night.”  He was not arrested or even asked to exit his car for field sobriety tests. 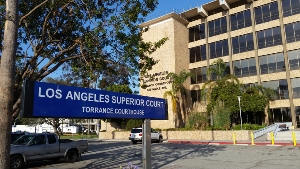 Torrance Superior Courthouse
Our client was granted 36 months of summary probation and ordered to attend a minimum of six months at a special residential alcohol addiction program in Arizona and pay $238 in fees and restitution.  The Torrance City Prosecutor and the judge recognized our client from prior drug and alcohol related cases, so the plea bargain terms were relatively lenient in light of his decision to enter a residential alcohol rehabilitation program to address his addiction.

After finishing his drug treatment program in Arizona, our client quickly ran into problems finding employment that had any upward mobility, as he was on probation.  Each employer would ask or find out about his criminal record and offer him jobs with little responsibility.  He would then see other employees promoted who were clearly less educated and less motivated.  The other employees were also poor performers, which really irritated our client because the jobs were easy jobs.  For example, our client had these experiences at a sandwich shop that he worked at for over a year and at an auto repair location, too.

Some employers conceded that he was more qualified than other employees, but the employer could not give him the position because of his probation.  It was extremely frustrating for our client, as if he was dragging around a thousand pound weight with him wherever he went.

Our client successfully completed 30 months of his summary probation without incident.

Greg Hill & Associates then filed a motion for the judge to order modification of our client's probation, asking that the judge end probation to remove the ceiling on our client’s employment future.

Greg Hill & Associates appeared at the hearing and argued to the judge that our client was eligible for the relief sought and had worked hard for 30 months to get a promotion that would only escape his reach because of his status of being on probation.  The court struggled with appearing to give our client extra special treatment, but also realized that this “break” was exactly what our client really needed.  The judge then granted our request to have our client’s probation terminated.

Our client was super happy with this and we then discussed expungement of the conviction, which we also sought and the judge granted.