Our client was returning from a bar in Long Beach with her boyfriend. The two were proceeding northbound on Western Avenue approaching Palos Verdes Drive North. It was about 12:40 a.m.

As the two turned left onto westbound Palos Verdes Drive North, to cross southbound traffic on Western, they suddenly saw another car coming at them. They had not seen the car when they started the turn and now realized there was going to be a collision. And there was.

The two cars did not collide head-on, quite luckily. At the last instant, both drivers steered away, but not enough to avoid a side-swipe impact.

Our client then called her mom to let her know about the crash. This was about 12:45 a.m. Our client’s cell phone showed this and her mom was available to testify that the subject of the call was the crash.

Our client’s mom then came to the scene, which was only a ten minute drive from her house. When she got there, she spoke to her daughter and confirmed that she was not injured. The two then stood by their car, trusting that the other party had called the police.

Police did not show up for about an hour. When they did arrive, they were more interested in investigating injuries and finding witnesses. They had no concern with doing a DUI investigation. In fact, by the time our client was suspected of DUI and given a blood test (she refused a breath test), it was after 4:00 a.m. In other words, well more than three hours had passed since the accident.

The case was filed in the Torrance Superior Court. Greg Hill had won the DMV hearing for the client on grounds that the blood test results (showing a BAC of 0.14%) were irrelevant because they did not fit within the three hour presumption set forth at Vehicle Code § 23152(b). In other words, the BAC measurement could not be used to fix our client’s BAC at the time of the accident because the blood sample was drawn more than three hours later.

The District Attorney handling the case in Torrance understood the issue, but claimed the prosecution could reverse extrapolate the blood results, meaning they could add 0.018% per hour to the 0.14% BAC to arrive at a BAC of roughly .20% at the time of the accident. 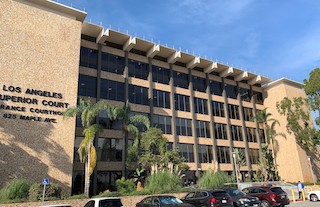 Torrance Courthouse
Greg Hill responded that even Kurt M, Dubowski, the most well known prosecution expert witness nationwide on drunk driving cases, refuses to engage in retrograde analysis because, as he says, it has never been scientifically accepted as a trustworthy and reliable method in any state. Raul Mata v. State of Texas (1994, Fourth Court of Appeals) No. 133-00, footnote 79 (retrograde extrapolation should not be relied upon in a criminal case).

The prosecution responded by offering our client a plea bargain to a wet reckless, although she would have to do the SB38 alcohol awareness program, which she had just completed for her second DUI. Our client would face no jail time at all on this third DUI under the deal.

The client understood that taking the matter to trial involved a minimum jail term of 90 days if she was convicted and the IID requirement would be avoided with a plea to a wet reckless.

The client also appreciated that having a BAC of 0.20%, if believed by the jury, would almost certainly influence the jury towards easily arriving at a conviction.

The prosecutor offering the deal commented that in six years of practicing, he had never heard of a wet reckless being offered on a third time DUI with a BAC of 0.20%. Our client accepted the plea, happy that our office had spotted the issue with the excessive delay in testing.

For more information about why a “wet reckless” is superior to a DUI and how courts handle hit and run charges, click on the following articles:

Watch our video about DUI by clicking here.Contact us.
Serving Torrance, Long Beach, Compton, Airport Courthouses and Other Courthouses.