In 2005, when our client was 19 years old, he had sex with the fourteen-year-old friend of his girlfriend.  While no force or threats were used (it was consensual), the case was quite serious because of the age difference.

In a Nutshell:  Our client is convicted of felony statutory rape under Penal Code § 261.5(d) in 2005 and later moves to Utah.  The conviction is surprisingly not a problem until 2018 when he is finishing a masters degree.  Our office has the conviction reduced to a misdemeanor at the Airport Courthouse and then expunged.

Our client was arrested by the Los Angeles Police Department and charged in the Airport (LAX) courthouse with violations of Penal Code § 288(a) (lewd acts with a child under age 14), § 288(a)(b)(1) (lewd acts with a child under age 14 using force or fear), § 289(b) (forcible sexual penetration with a foreign object) and two counts of § 261.5(B) (statutory rape of an underage person when the suspect is not more than three years older than the victim).  As to the last count, the charges related to our client’s admission that he twice had sexual intercourse with his sixteen-year old girlfriend.  All such charges were filed as felonies.
Our client retained a local attorney who resolved the case for an amended charge of Penal Code § 261.5(d), as a felony.  This was a strategic decision because 261.5(d) is a wobbler and if a misdemeanor, the conviction is eligible for expungement.  Penal Code § 261.5 is described as a person 21 or older who engages in sexual intercourse with a person under 16. 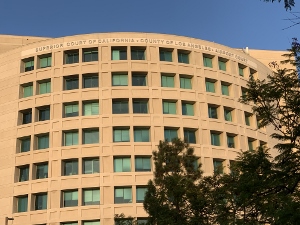 The terms of the plea bargain were harsh: five years of formal probation, including 365 days in county jail (suspended, with credit for 70 actual and 34 good time / work time under Penal Code § 4019), two years of Alcoholic Anonymous meetings twice per week, and one year of Sexual Addicts Anonymous (SAA) meeting, once per week.
The client fulfilled all terms of probation in record time with zero problems.  With less than two years of formal probation completed, the judge reduced the probation from formal probation to informal probation and the client moved to Utah.
In Utah, he enrolled in college and earned a four-year degree.  He got married (to the girlfriend who was allegedly the victim) and had two boys.
Fast forward to 2018 and the client was enrolling in graduate school and needed to be able to travel to Canada for classes.  He was also eligible for promotion at work and needed the felony reduced to a misdemeanor and then expunged.
The client called Greg Hill & Associates and spoke to Greg.  The client explained his underlying conviction and how his probation went.

Greg then pulled the docket report from the courthouse to confirm that the client was eligible for reduction of the felony to a misdemeanor under Penal Code § 17(b).
Greg further explained that once the conviction was reduced to a misdemeanor, he could request that the judge sign an order of dismissal under Penal Code § 1203.4.  Greg explained the limits of expungement and how it did not mean the case was erased or deleted from his record, as it literally is in other states.
Greg got the docket the following day and called the client in Utah.  He told the client that his conviction indeed was eligible for reduction to a misdemeanor and that our office could prepare the motion for this, file it, serve it and appear with the client in the Airport Courthouse at the hearing.
Our office then did prepare, file and serve the motion.  About three weeks later, the hearing date arrived.  Our client flew out from Utah for the hearing.
The prosecution did not oppose the motion at all, commenting that they were happy to see our client had moved on in life and appeared to be well on his way to becoming a successful and accomplished member of society.  The judge at the Airport Courthouse granted the motion to reduce the conviction, under Penal Code § 17(b)(3), to a misdemeanor.
Our office later filed the petition for dismissal under Penal Code § 1203.4 (expungement), which was also granted.  Our client was very happy with these results.

For more information about statutory rape, 17(b) relief and expungement, please click on the following articles:
Contact us.
Serving Torrance, Long Beach, Compton, Airport Courthouses and Other Courthouses.