Our client, then age 30, was in a tumultuous relationship with a woman who was addicted to methamphetamines.  She then turned him onto the drug and their relationship became one of constant fighting, stress and, basically, nothing that our client wanted to continue.

In a Nutshell:  Client, age 42, has a conviction from the San Fernando courthouse for felony false imprisonment from twelve years earlier reduced to a misdemeanor and the conviction expunged.  The reduction of the felony to a misdemeanor greatly helps him in his job search.

He and his friend thus rented a U-Haul truck and drove over to the apartment our client shared with his girlfriend.  He advised her that he was moving out immediately and that their relationship was over.

The girlfriend did not take the news well, as our client was highly educated and seemed to have enormous earnings potential in the future.  The girlfriend had hoped to marry him and stop working for the rest of her life.  His decision to end their relationship ended her dreams of a life of leisure.

So as our client and his friend were lifting some furniture out of the house, the girlfriend claimed our client hit her and locked her in a room.  She called the police, who came to the scene and arrested our client on charged of first-degree residential burglary (he was on the lease!), felony false imprisonment (Penal Code § 236), felony domestic violence, possession of methamphetamine (none was found on him, but some was found in the moving van in the rear of the van, which our client had not even opened yet), trespass and felony criminal threats.

Our client was cooperative with the police.  His friend was not charged with anything.

Our client posted bail and eventually, all charged were dropped except the felony false imprisonment and first-degree residential burglary, which was curiously amended to second-degree commercial burglary.

A plea bargain was reached that avoided prison time, but did include 180 days in county jail and a lengthy drug rehabilitation program and significant community service (300 hours).

Our client struggled through probation because of the drug treatment program.  He violated probation over a dozen times due to recurring positive tests for methamphetamine.  Each time, however, he was reinstated on probation, often with a short stay (30 to 90 days) in county jail as punishment.

However, seven years after beginning probation, he completed probation.  The time for being on probation was extended multiple times when probation was revoked for a few months, perhaps five or six times.

Fast forward to 2017 and the client was applying for various jobs, but kept getting turned down due to his two felony convictions arising from this fabricated incident with his then-girlfriend.

He then called up Greg Hill & Associates and asked what he could do for him.  Greg explained that the false imprisonment charge was a wobbler, so one could ask the judge to reduce the charge to a misdemeanor and then expunge it.  As to the second-degree commercial burglary charge, Greg explained that it was a straight felony (not a wobbler), but the judge could expunge the conviction, too.  Greg cautioned that because the client had violated probation so many times, a judge would be well-within her authority to deny reduction of the false imprisonment charge to a misdemeanor and deny both requests for expungement.

The client understood this, but knew he had to try for this relief, as he needed a job.  Greg thus prepared the petition for expungement with a request for reduction of the false imprisonment charge and then filed it in the San Fernando Superior Court. 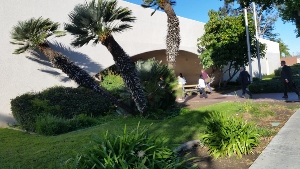 San Fernando Superior Courthouse
The judge there did reduce the false imprisonment charge to a misdemeanor and granted expungement of it, but denied the request for expungement of the second-degree commercial burglary.

The client was still overjoyed, as having only one felony on his record made him more marketable.  He planned on contacting certain employers who had previously rejected him, saying that if he just had one felony, they would have hired him.