Our client, age 26, went out for drinks in Redondo Beach at the Redondo Beach Pier with friends from work.  It was fun and our client drank perhaps more than her fair share out of an effort to show others she was enjoying the evening.  She really did not like to drink, but understood that being social with others, especially those from work, was important.
On her way home, going eastbound along 190th Street, she allegedly went through a stop light without stopping.  This caught the attention of a Redondo Beach police officer who was stopped at the light and facing in the opposite direction.
The officer quickly turned his vehicle around and pursued our client, who he claimed was speeding as well.  After he stopped our client and realized that she may be under the influence of alcohol, he had her submit to a breath alcohol test at the scene.  This test, administered by our client blowing into a preliminary alcohol screening (PAS) device, recorded her blood alcohol content (BAC) at 0.21%. 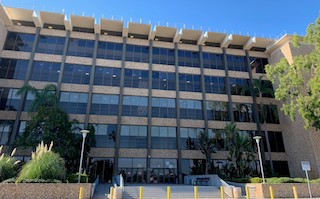 Torrance Courthouse
The officer promptly arrested our client and took her to the Redondo Beach Police Station.  She was given a breath test again while at the station and it measured 0.21% again.
This was our client’s first DUI and first criminal case of any sort.  She had been a school teacher for four years in a pre-kindergarten program in Inglewood.
The client then called Greg Hill & Associates, who resolved the case with the client ultimately pleading to a violation of Vehicle Code § 23152(b), with three years of informal, or summary, probation on the condition that she enroll in and complete AB 762 six-month alcohol awareness program, pay a court fine of $390, plus penalties and assessments (less credit for one day in custody when arrested – total owed was $1,464), attend the Mothers Against Drunk Driving (MADD) victim impact panel (VIP) and pay the $245 City of Redondo Beach booking fee.
The client made her way through half-way in probation and completed all the terms except the passage of 36 months of probation.  Greg e-mailed her at the half-way mark in probation to ask if she was interested in asking the judge for early termination of probation under Penal Code § 1203.3(a) and, then if probation was ended early, expungement of the conviction.  The client did not respond.
At the 27-month mark in probation, however, the client contacted Greg Hill & Associates and asked if Greg could help her end probation early.  She was missing out on some higher-paying teaching job opportunities by being on probation and having a conviction for DUI.
Greg Hill & Associates then prepared a motion for early termination of probation for the client, filed it in the Torrance Superior Court and served the Redondo Beach City Prosecutor.  The motion explained that the client had completed all affirmative obligations of probation and was experiencing great hardship professionally by remaining on probation.
The declaration from the client attached to the motion for early termination of probation described how the client wanted to apply for certain jobs that paid significantly more, but was disqualified from consideration from such jobs by being on probation.  The client had also been forced to move back home with her mom because she could not afford to live on her own with the low pay she earned while being on probation.  The declaration also described how our client was interested in applying for a master’s program in education to better her career, but she could not enter the program while on probation.
The hearing for the motion then came and the judge granted the motion.  The Redondo Beach City Prosecutor agreed to early termination of probation, stating that our client had made a “sufficient showing of hardship.”
Greg Hill & Associates then filed the petition for dismissal under Penal Code § 1203.4, also called expungement.  The judge handling the case also granted this motion.
The client was extremely happy with being off probation finally and having the conviction expunged.  She felt free again to pursue her career within teaching and go on to earn a master’s in education.
For more information about early termination of probation and expungement issues, please click on the following articles:
Contact us.
Serving Torrance, Long Beach, Compton, Airport Courthouses and Other Courthouses.