Our client, age 31, and her boyfriend were in town from Ventura for a short vacation.  They got a hotel room at the Crowne Plaza Hotel and then ventured out to enjoy the nightlife of Hermosa Beach.
The two intended on drinking enough to relax as would be expected on a vacation.  However, on this particular night, they exceeded their goals in an unfortunate way.
Our client’s boyfriend got so drunk that when he and our client returned to the Crowne Plaza Hotel, he laid down in the lobby and fell asleep.  Our client asked hotel staff to help her get him up to the hotel room and the staff obliged, providing her with a wheelchair to put him in and wheel him up to the room. 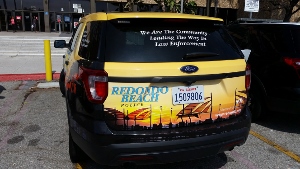 Our client, however, was not able to push her boyfriend up to the room and instead rammed him into a wall, causing the wheelchair to topple over and her boyfriend to fall out.  She then kicked him in the head, punched him in the nose (causing it to bleed) and punched him in the eye area, causing a cut above his eye that bled profusely.  Another hotel guest observed the beating taking place and called the police.
By the time the police arrived, our client and her boyfriend had found their way to their hotel room.  However, there was a trail of blood from the point where our client beat up her boyfriend to the hotel room.  There was even blood on the door handle.
When police entered the room, our client told police that she wanted to kill her boyfriend.  The boyfriend was then taken by ambulance to Torrance Memorial Hospital, where photographs were taken of his bloodied face and head.  They were pretty bad and would have had tremendous jury effect.
Our client was taken to the Redondo Beach Police Department.  She had no prior criminal history.  After she posted bail of $50,000, she called Greg Hill & Associates.  Our office then spoke with the client and eventually resolved the case for a misdemeanor violation of Penal Code § 273.5 (domestic violence) with three years of summary probation, 52 batterers classes, 40 hours of Cal-Trans service, payment of a $245 booking fee to the City of Redondo Beach and court fees of $750 (including a $500 “donation” to a domestic violence victims fund).
After nearly two years of summary probation and after having completed all tasks except the passage of 36 months, the client contacted Greg Hill & Associates about early termination of probation and then expungement.  The client’s boyfriend, now her fiancé, and her traveled a lot and her being on probation often slowed down their coming through customs, she complained.
Greg and the client discussed early termination of probation and her case in particular.  Greg commented that the Redondo Beach City Prosecutors Office was well-known for opposing any motion for early termination of probation, especially in domestic violence cases.
However, the client asked Greg to file the motion anyways, even knowing the motion would most likely be opposed strenuously.
Greg Hill & Associates then prepared, filed and served the motion for early termination of probation.  Surprisingly, the Redondo Beach City Prosecutors Office did not oppose the motion and it was granted by the judge.
Greg Hill & Associates then prepared the petition for dismissal form (FL-180), supplementing it with a supplement memorandum and a declaration from our client.  This was then filed, served and granted by the same judge as well.
The client and her now fiancé were very happy with these results.
For more information about early termination of probation and expungement, please click on the following articles:
Contact us.
Serving Torrance, Long Beach, Compton, Airport Courthouses and Other Courthouses.