It was still light out, but nearing sunset. Another driver near him noticed that he was taking the turns in the road very wide and called 911. She told the dispatcher that she thought the driver was drunk based on his driving. She went on to describe him as “white,” driving a black Ford pick up truck with a cracked windshield and wearing a baseball hat.

In 30 Words or Less:  Client pulled over based on description given of a driver in a 911 call. Our client did not fully match the description, but he had a 0.26% and 0.29% blood alcohol content (BAC), so he was arrested for DUI. Case resolved for a six-month alcohol awareness program (AB 762) and no jail after our office files a motion to suppress that the prosecution apparently worried would be granted.

The woman described her location as being in north Redondo Beach and police were dispatched to the area.

Within minutes, our client was pulled over about two blocks from where the lady reported seeing such a driver. Our client, however, was Hispanic, and he was driving a grey GMC Sierra pick up with no crack in the windshield. He was, however, wearing a baseball cap.

The officer observed no violation of the law or any impaired driving. He simply made a traffic stop because he thought our client matched the description of the possible drunk driver. The officer seemed to assume that our client would drive around in circles near where the reported drunk driver was seen and not travel several miles in the three of four minutes between the call and the stop. After all, one who is driving even thirty miles per hour can cover a mile in two minutes, not just two blocks in three minutes. 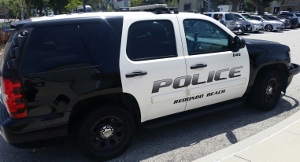 The officer pulled over our client and immediately asked our client if he had been drinking. Our client answered that he had and the officer asked him to provide a breath sample at the scene in a preliminary alcohol screening (PAS) device. Our client did so and his breath was measured at 0.29% and 0.26% BAC, well over triple the legal limit.

Our client was then immediately arrested and taken to the police station where he was asked again to provide a breath or blood sample and he refused.

He then fell asleep at the station in the holding cell and was released the following morning.

He immediately called Greg Hill and described what had happened, but not knowing the officer’s basis for his stop. He was simply confused about what would happen next and he did not want to lose his license.

Greg asked the client what reason the officer told him was the basis for the stop. The client did not know. The client did know that the police were extremely deliberate in warning him of the licensing consequences of refusing to give a blood or breath sample, so he knew that he faced problems on that issue.

Greg explained what would happen at each stage of the case and then had his office reserve a DMV Hearing.

In receiving the police report and the police officer’s body-cam video, Greg realized that the traffic stop was most likely of the wrong car and that the 911 call was not sufficiently descriptive to allow the stop that the officer made.

Greg thus filed a motion to suppress the evidence of the client’s PAS test and all other evidence following the illegal traffic stop, citing to Penal Code § 1538.5 and the People v. Wells case (for the 911 call and the stop thereafter).

The Redondo Beach City Prosecutor’s office received Greg’s motion to suppress and referred it out to a large, expensive law firm in Newport Beach to prepare the opposition to the motion.

Greg then appeared for the hearing on the motion and discussed the merits of the motion with the prosecutor. The prosecutor acknowledged that the 911 calls details did not match the characteristics of our client or his car and reduced the plea bargain offer from a nine-month alcohol awareness program to a six-month program.

This was not the dismissal our client wanted, but Greg warned him that the judge would consider the blood alcohol level of the client even though that was not the issue in the motion. Greg also warned that client that police officers often testify to additional grounds for a traffic stop that are not described in the police report and that if the officer were to do this (realizing the case was about to be dismissed if he did not do so), the judge usually believes such conveniently remembered facts.

The client understood this and accepted the reduced offer, which saved him perhaps $500 in alcohol class fees and three months of additional classes

For more information about issues refusals to submit to a DUI test, please click on the following articles: