As the reader may be aware, there is a mandatory minimum sentence enhancement of 60 days in county jail if one is arrested for DUI after police determine that the speed exceeded 30 miles per hour above the speed limit on a highway or 20 miles above the speed limit on a city street. This is because alcohol and /or a controlled substance can impair one’s ability to safely drive and excessive speed makes driving quite a bit more difficult and thus dangerous to the public.

Condensed Version of This Case:  DUI cases in Palos Verdes Estates often involve an officer alleging speeding, weaving and after the arrest, a refusal by the client to submit to a breath or blood test. This is unlike any other arresting agency. The following case followed this familiar script. The case was resolved with no jail despite the applicability of Vehicle Code § 23582, which mandates 60 days minimum of county jail if one is DUI and 20 miles per hour or over above the posted speed limit on city streets.

In the following DUI case out of Palos Verdes Estates (PVE) and then the Torrance Superior Court, our client was returning to his parents’ home in San Pedro. He had been to a few bars in Hermosa Beach and decided to get to San Pedro by using Palos Verdes Drive West and Palos Verdes Drive South. It was about 2:15 a.m. 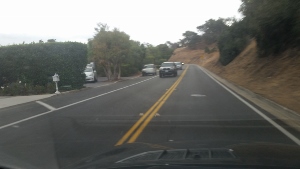 As the client approached the Malaga Cove Plaza area, the officer claimed our client accelerated and went right through the four-way, well-marked stop sign intersection near the PVE City Hall at over 55 miles per hour with no attempt to slow down. 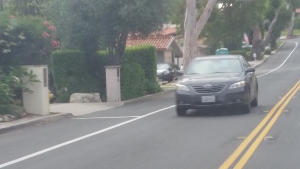 PV Drive West at Malaga Cove
The officer followed our client up the winding section of Palos Verdes Drive West, allegedly observing our client almost hitting a few parked cars and also crossing into oncoming traffic more than once. One may wonder why the officer did not attempt to make a traffic stop upon simply first seeing our client speeding.

As Palos Verdes Drive straightened out, the officer allegedly paced our client at 58 miles per hour before turning on his overhead blue and red lights to initiate a traffic stop.

While being held to “sober up,” our client did submit to a breath test that the officers gave just to monitor his BAC and he measured 0.14%. This was five hours after he last drove, so if his BAC decreased at 0.018% per hour (the average absorption rate of ethanol), his BAC when driving would have been 0.23% when driving.

Once the client was released from jail, he called our office. This was his first DUI and his first criminal case of any type. He was very anxious about what would happen and what he needed to do.

Greg listened to the client explain his driving and his arrest. Greg then explained how such “refusal” cases are typically handled in the Torrance Superior Court, as the prosecutor was aware that Palos Verdes Estates police very frequently claim the suspect refused a breath or blood test when the client often did not refuse to submit.

Greg then appeared in the Torrance Superior Court on the client’s behalf while the client remained at work. Greg negotiated a resolution that had the prosecution strike the excessive speed allegation and the refusal, as well as what would otherwise have most likely been a high BAC case as well.

The client was required to be on summary probation for three years, with an obligation to enroll in and complete the three-month alcohol awareness program (AB541), pay a court fine of $390, plus penalties and assessments (about $1,870, less credit for one day in custody for his arrest) and pay the PVE booking fee of $245.

The client was quite happy with the resolution, as he feared sixty days at least in jail and a one-year license suspension from the court for the refusal to submit to a breath or blood test. He avoided both of these consequences, which was a big relief.