Home
Other Information
Criminal Defense Articles
What Punishment Might I Face for a First-Time DUI?

What Punishment Might I Face for a First-Time DUI?

Our office often is asked the above question from a potential client facing his or her first DUI.  The question is often motivated by a concern over being sent to jail.

In a Nutshell:  The minimum punishment for a first-time, misdemeanor DUI in California involves a $390 fine, plus court penalties and assessments, an outpatient alcohol awareness class (the length of which generally depends upon one’s blood alcohol content), a minimum of 36 months of summary probation and whatever other conditions the court deems appropriate, which can include county jail time, depending upon the county involved and the facts of the case and defendant’s prior criminal history.

Our answer is usually prefaced by a short apology and then a rather open-ended answer.  My answer is, “I apologize for sounding like a lawyer, but the answer is it matters.”  I then explain what the minimum punishments set forth by statute are, followed by what is dictated by the facts of the case and the prosecutor’s discretion.  I do my best to explain how plea bargaining works and what types of arguments and information affect the ultimate terms of a sentence or plea bargain. 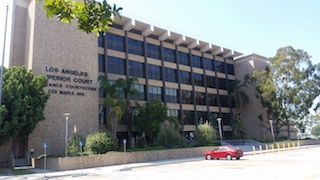 Torrance Courthouse
The minimum punishments set forth by law (by statute) differ by whether the DUI involves a blood alcohol content (BAC) of 0.20% or higher, whether the individual refused to submit to a breath or blood test and whether the case involved a collision and/or injury to another person.
In our experience, perhaps ninety-five percent of first-time DUI matters involve a BAC below 0.20%, no refusal to submit to a test and no collision or injury.  Most cases also do not involve having a child in the vehicle, which can expose the DUI driver to a charge of violating Penal Code §§ 273a(a) and 273a(b), child endangerment.

On a first-time DUI, the judge may order a jail term of 48 hours to six months in county jail.  This is rarely done.  No jail is mandatory by statute, although certain counties (i.e. Riverside) do impose a small amount of county jail custody time.  Los Angeles County, Orange County and San Bernardino County generally spare a first-time DUI defendant any jail time.

It merits mention that a defendant may “convert” his entire sentence to jail to avoid probation if he or she so choses.  This is commonly done if one is entering a job, i.e. the military, where one cannot be on probation to accept the job.

Normally, the DUI driver (defendant) enters into a plea bargain that includes a minimum of thirty-six months on summary, or informal, probation (Ventura County oddly often makes this formal probation).  The judge can order probation up to five years.

Summary probation has certain requirements by statute for a first-time DUI defendant.  They are payment of a $390 fine, plus penalties and assessments.  The penalties and assessments add about $1,500 to the $390 fine, making the total owed to the court roughly $1,900.  Generally speaking, most judges allow a year for the defendant to pay this amount.  Most judges also provide defendant with the option of satisfying the great majority of the $1,900 through community service, although it is roughly 200 hours of community service.