Our client, age 36, had been out to a karaoke bar in Torrance with friends after work. He was driving home to Rancho Palos Verdes by going through Palos Verdes Estates.

As he was driving south on Palos Verdes Drive West and approaching the stop sign at Cloyden Road, he looked down at his phone and completely blew right through the intersection.

The Gist of This Summary:  Client stopped for DUI after he runs stop sign on Palos Verdes Drive West at Cloyden Road. PVE Police claim he refused to submit to a breath or blood test. Case resolved in Torrance Courthouse with a three-month DUI program, not a nine-month program as is otherwise mandatory with a DUI with a refusal to submit to a test.

A PVE police officer, facing northbound on the opposite side of PV Drive West, separated by a center median with trees and bushes, saw our client run the stop sign. He turned on his overhead flashing red and blue lights and pursued our client. As it took the officer about 30 seconds to get his car out of park and into drive, turn west on Cloyden and then south on PV Drive, our client was almost a half-mile ahead by the time the officer started closing the distance. 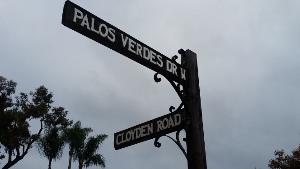 The next stop sign along Palos Verdes Drive West, going south, is at Yarmouth Road and it was here that our client came to a stop, noticed the officer in his rear-view mirror and realized the officer was pulling in behind him.

Our client obediently pulled into the parking lot of the nearby market and liquor store of the Lunada Bay Plaza that is by this intersection.

The Palos Verdes Police Officer making the stop told our client that he saw our client run the stop sign back at Cloyden Road and our client admitted as much. The officer then allegedly detected the odor of alcohol in our client’s breath and asked him if he had been drinking. Our client stated he had not.

The officer then told our client that he would dismiss the stop-sign ticket if our client provided a breath sample to show he was not drinking. Our client deferred, saying, “No, just give me the stop sign ticket, please.” 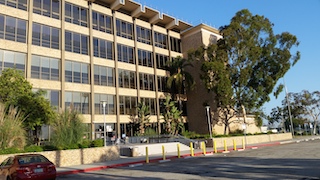 Torrance Courthouse
The officer then just simply arrested our client for DUI without asking him to perform any field sobriety tests. On the way to the police station, the officer again asked him to submit to a breath test, which our client believed would be on the roadside (not at the station) and our client again refused.

The client then arrived at the PVE Police Station and asked to take a blood or breath test. The police told him “no, you already refused.” The client was then held for about six hours and released to his wife.

Very confused about what had just happened, he called Greg Hill & Associates and spoke to Greg Hill over the phone, later meeting him the same day. The client explained what had happened and Greg responded that the officer’s offer to dismiss the stop-sign ticket in exchange for a breath sample was improper. However, Greg said that it was very unlikely the police report would ever confirm this offer and would probably even say that our client refused to submit to a test after being read the proper admonishment.

Greg then appeared in court and reviewed the police report. Our client was not charged with failing to stop at a stop sign, but he was charged with DUI, Vehicle Code §§ 23152(a) and 23152(b). As expected, it said nothing about the police officer’s offer and the officer did not have any body-cam video and audio recording of events. The report further stated, as Greg anticipated, that the client refused to submit to a breath or blood test after being properly admonished.

Greg spoke with the Torrance District Attorney handling the case at the arraignment and described what our client had told us happened. The District Attorney commented that he did not doubt our client, but he could not just dismiss the case, as if the case were to go to trial, a jury would most likely believe the police officer and not our client.

Greg explained the offer to the client, who appreciated the DA’s offer and accepted it after much discussion of how such a defense would likely appeal to a jury. Due to the client’s busy business, the number one thing he wanted in the case was closure, not a lengthy trial that would disrupt his work.