Home
Other Information
Criminal Defense Articles
Does McNeely Give a DUI Suspect the Right to Demand a Warrant?

Does McNeely Give a DUI Suspect the Right to Demand a Warrant?

The U.S. Supreme Court decision in Missouri v. McNeely (2013) 569 U.S. 141 (133 S. Ct. 1552) has been interpreted in many ways over the last few years.  Some of the interpretations are simply wrong and have been criticized, ironically helping others gain a clearer understanding of the decision.

Brief Synopsis: McNeely does not require a warrant for a blood test and a driver, under McNeely, cannot refuse to submit to a breath or blood test without the police first getting a warrant.

In response, the police officer treated her demand as a refusal to submit, arrested her and she later was charged with DUI.  Espinosa then had a DMV hearing, at which she was found to have refused to submit to a chemical test.  Her license was suspended for a year.

Espinoza then filed a petition for writ of review and administrative mandamus in superior court, challenging the DMV decision.  This article is about the ruling on the legality of her position and whether her conditional consent was proper. 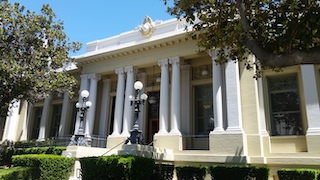 Old Riverside Courthouse
A small bit of factual background information is helpful to understanding the context of this case.  At about 2:00 a.m. on May 15, 2013, a CHP officer on patrol in the City of Riverside observed Espinoza driving a car while talking on a cell phone she held to her ear.

The CHP officer pulled over Espinoza and immediately noticed the odor of alcohol while talking to her.  He asked where she was coming from and she said she had been at a local bar.  Espinoza then said that she had consumed one cocktail, but nothing else.

The CHP officer responded by asking for more CHP help at the scene.  Espinoza then stepped out of her vehicle and reiterated that she would not perform any filed sobriety tests.  While standing on the sidewalk, she allegedly stumbled and almost fell down.

When the second CHP officer arrived at the location, Espinoza told him that she was a Riverside County public defender and that she would not perform any filed sobriety tests, but that she would submit to a blood test “pursuant to McNeely.”

She was then arrested and taken to jail.  At the jail, she said she would submit to a blood test only if the officer got a warrant first.  No warrant was obtained, so no blood was given.

As mentioned above, Espinoza then went to her DMV hearing and lost.  The DMV found that Espinoza had refused to submit to a breath or blood test.

In Espinoza’s petition for writ of review, she argued several issues, but this article will only address her argument that she had a right under McNeely to force the police to obtain a warrant before they withdrew blood and therefore, her conditional consent was not a refusal.

At the superior court level, the court denied the petition.  Espinoza then appealed the ruling to the Fourth Appellate District.

The Fourth Appellate District, in Bernice Espinoza v. Jean Shiomoto (2017 DJDAR 331), affirmed the trial court on its ruling.  The appellate court noted that Espinoza did have a constitutional right to be free from a warrantless, coerced search of her blood incident to an arrest, but she had no such right with respect to a breath test.  When the CHP told her they would not get a warrant for a blood test, she was required to choose a breath test and she did not.  Her position therefore constituted a refusal to submit to a chemical test.

Moreover, the law on consent required that to comply with the law, a “driver should clearly and unambiguously manifest the consent required by the law.  Consent which is not clear and unambiguous may be deemed a refusal.”  The court looks not to the state of mind of the arrested driver, but to the fair meaning to be given to the driver’s response to the demand that he or she submit to a chemical test.  Garcia v. Department of Motor Vehicles (2010) 185 Cal.App.4th 73, 82-83.