Our client, age 41, was coming home from work as a sound engineer on a rainy winter evening.  It was dark out and the combination of the rain and the car headlights made seeing clearly difficult.
Our client was in the lane closest to the right side of the road.  The road was narrow and there was no parking or bike lane.  The right side of our client’s car was traveling very close to the right curb just because the lanes were narrow.
Suddenly, our client felt a bump along the side of his car toward the rear.  He could tell it was not another car.  He reflexively looked over his shoulder and could seek it looked like the silhouette of a person on a bike.  The client realized the cyclist had run into his car, but remained upright and had not fallen to the road.
The client wanted to yell to the cyclist to get off the road, as riding along the road was quite dangerous, but traffic was moving along at about 30 miles per hour and our client kept going, thinking the cyclist was going to be hit again by someone else and may not be so lucky again to avoid a fall. 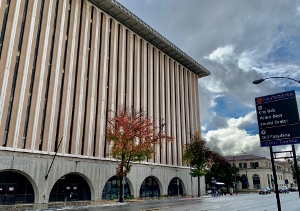 The client drove home and called his father, who was a top age-group cyclist, to describe his drive home.  His dad said the cyclist was certainly very skilled to survive such a bump from a car along a narrow road at night, in rain no less.
About a year later, our client received a letter in the mail advising him that a case had been filed against him for felony hit and run (Vehicle Code § 20001) arising out of the rainy evening in question.  Apparently, the cyclist had made a claim to the police and reported our client’s license plate number.
The client went to the Pasadena Superior Court, curious what the injuries to the cyclist could have been since he remained upright after bumping into out client’s car and our client did not hit the cyclist from behind.  Our client believed the cyclist had veered into the side of our client’s car, meaning the cyclist hit our client, not vice versa.
The case dragged on for several months with the cyclist never submitting any documentation of any medical expenses or any repair estimates for his bike.  However, he insisted that he had visited the emergency room.  He also refused to come to court, saying he was insulted at being doubted.
However, our client resolved the case for no jail, three years of formal probation, twenty days of community labor and $370 in court fines, using the public defender.  The client was fearful of any time in jail or prison, so he agreed to the plea bargain.  He had no prior criminal history and immediately regretted his decision of using the public defender after a few months of formal probation.
More than two years later, he called Greg Hill & Associates, explaining the facts of the case, how he had completed all terms of probation and that he was interested in early termination of probation and then expungement.  He described how he was unable to get much work while being on probation.  Apparently, several large studios sought to hire him for overseas projects, but he could not travel into such countries while on any form of probation or as a convicted felon.
Greg Hill & Associates then prepared a motion for modification of probation under Penal Code § 1203.3(a), with a plan to thereafter immediately file for expungement and reduction of the offense to a misdemeanor if the judge ended probation early.  At this point, the client had completed 27 of 36 months of formal probation.
At the hearing on the motion, to Greg’s surprise, the prosecutor argued against early termination, pointing out that the victim was quite emotional about his medical treatment and injuries.  The female judge openly asked what the restitution ordered was and Greg pointed out it was zero because the victim refused to come to court, saying it was insulting that his word was insufficient.
The female judge was skeptical of the prosecutor’s argument as well, but the prosecutor was sincere in her representations and apparently did find the “victim” credible.  In other words, the prosecutor was not merely reciting a standard prosecution argument with zero enthusiasm.
The judge could see that the prosecutor was very strongly against early termination, but also understood our client’s predicament with work.  She compromised in an attempt to appease the prosecutor, saying she would terminate probation in 90 days and grant the reduction to a misdemeanor and expungement at the same time.  While the client was a bit upset that he could not get his probation terminated immediately, he was nonetheless relieved to know he would no longer be on probation, have a felony or any conviction to his name in 90 days.
For more information about early termination of probation and expungement, please click on the following articles:
Contact us.