Our client, age 37, and her husband, age 40, lived in Gardena.  They were both from the Philippines and they both worked in the medical field.  Our client was an LPN, working toward becoming a registered nurse (RN).  She had a solid, but severely underpaid job at a local hospital.  They had no children.
One evening, our client and her husband were bickering over household chores and the argument became physical, with our client somehow cutting her husband’s forehead, she believed with her fingernail.  The cut caused his forehead to bleed just a little.
Neighbors heard the two arguing and called the Gardena Police Department, who arrived and, seeing the bloody forehead of our client’s husband, arrested our client.  This was a tremendously traumatic time of our client, as she had never been arrested before and, not being born in the United States (but she was a U.S. citizen), she believed jails were violent places and that she may have to share a cell with a violent murderer.  She did not know how our criminal justice system worked at all.
To her surprise, she was advised how to be released by posting bail and then appearing in court at a later time.  Her husband arranged with a bail bondsman how to post bail and then did so.  Our client returned home and then called Greg Hill & Associates.
When she called our office, she spoke with Greg Hill and then, later that same day, she met with her husband with Greg Hill.  They explained the case facts and their concerns with her LPN license.  The couple had already signed up for couple’s counseling program called “Our Relationship” through Torrance Memorial Hospital and our client had already signed up for an online, four-hour anger management program. 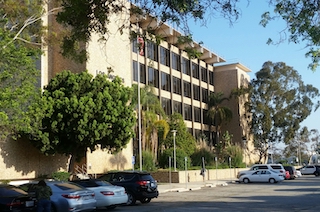 Torrance Courthouse
The couple hired Greg Hill & Associates and Greg negotiated a plea bargain wherein the client was placed on three years of informal probation on condition that she enroll in and complete a fifty-two session approved batterer’s intervention program, perform eight hours of approved community service, make a $500 contribution to a batterer’s prevention fund and pay $220 in court fines and fees.
Our client almost immediately paid the court fines and fees and made the $500 contribution.  Shortly thereafter, she performed the eight hours of approved community service.  In just over one year, she completed the fifty-two batterer’s classes.
Greg Hill & Associates, as in every case, contacted the client just short of the half-way mark in her probation to advise her that at the half-way mark of probation, she could request early termination of probation and then, if that is approved by the judge, expungement of the conviction.
At the seventeen-month mark of probation, Greg Hill sent the client an email so advising the client and the client responded that she was interested in ending probation early because she could not take a mandatory test while on probation, a test that was required for her to enter a class needed to become a registered nurse.
Greg Hill & Associates then prepared the motion for modification of probation so as to end probation, explaining to the judge the need to terminate probation early for her career and that such a consequence of being on probation was not anticipated while she was on probation.
The motion was accompanied by a declaration from our client explaining how being on probation had unexpectedly put a stop to her career until probation ended.
The motion also explained how the client, while having been on probation for just over eighteen months, had actually “behaved” for almost 2.5 years because the Torrance District Attorney’s office had not filed the case until seven months after the incident.  Our motion also explained how ending probation was the right thing to do because our client had taken a four-hour anger management class immediately after the incident and the couple had immediately started the “Our Relationship” class at Torrance Memorial immediately after the incident.
The Torrance judge handling the case granted the motion for early termination of probation over the District Attorney’s objection.
Our office then filed the client’s Petition for Dismissal (also called expungement), which the same Torrance judge granted.
For more information about early termination of probation and expungement issues, please click on the following articles:
Contact us.
Serving Torrance, Long Beach, Compton, Airport Courthouses and Other Courthouses.