Our client, age 36 in 2013, was arrested on suspicion of DUI when police came upon him and two other motorists who had been involved in a car accident on the northbound 110 Harbor Freeway.
Our client had been up studying all night and drinking at the same time.  He was studying for bachelor’s degree in English from U.C.L.A. and then had to go to work as a cook in downtown Los Angeles.  While heading to work, he was still feeling drunk and did not notice traffic stopping in front of him until it was too late.
He ran into one car, which then was pushed into a second car.  The first car that our client hit was driven by the wife of a police officer we knew well at Greg Hill & Associates because the officer calls himself “Mr. DUI.”  This particular officer consistency wins awards from Mothers Against Drunk Driving (MADD) for making the most DUI arrests in the city where he is assigned, although we have successfully had judges rules several such arrests were based on illegal traffic stops.
This particular police officer’s wife was injured by our client, but the driver of the third car was not.
Our client was arrested and submitted to a breath test at the 77th Precinct Station on Broadway.  His blood alcohol content (BAC) was 0.24%. 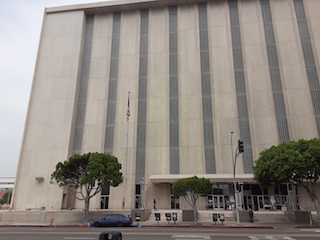 Metro Courthouse
This was a tough turn of events for him because he was not a U.S. citizen and it was his second DUI in three years.  In his first DUI, out of Torrance, our office also represented him.
Our office eventually resolved the second-time DUI with sixty (60) months of informal, or summary probation, the SB 38 eighteen-month DUI course, thirty (30) days of county jail and a $450 fine, plus penalties and assessments.
The client first served his thirty-day sentence in county jail, which was deemed served after four days of actually being in county jail.  He then finished the SB 38 program, but was stopped for driving on a suspended license due to his DUI (Vehicle Code § 14601.2).
The client resolved the 14601.2 case representing himself after speaking to Greg Hill.  The judge on the 14601.2 case sentenced our client to ten days in county jail, which is the mandatory minimum punishment, but did not find a probation violation or even revoke probation on his second-time DUI.
The client then paid the court fines on the second-time DUI and had a restitution hearing for the property damage and medical expenses to the DUI police officer’s wife.  Luckily for our client, the wife did not appear in court for her restitution hearing and our client paid nothing to her.
Our client, meanwhile, graduated with a bachelors of arts degree in English from U.C.L.A. and found a job as an officer manager for a large company that rents construction equipment.  It was a good job, but the pay was very low and he could barely cover his and his spouse’s rental expenses and health insurance.
He wanted to become an English professor, but he could not without at least a master’s degree in English.  He consequently applied at Cal State Long Beach, which accepted him, but he could not qualify for any financial aid while being on probation.  So, he was stuck in a low-paying job until his probation was finished.
The client went to court himself and asked for early termination of probation at just past the half-way mark, but the judge denied this request.
Once he finished probation, he immediately talked to Greg Hill about having the second DUI convicted expunged.  Greg explained that expungement does not erase, delete or remove the record of the DUI being filed against him, but does show that the case was dismissed and the last plea by the client is not guilty.  Greg explained that the big benefit of expungement is that is permits the client to legally enjoy a legal fiction that he was never convicted of the crime – he can legally state he was never convicted of the crime on employment applications, with certain exceptions.
Greg also explained how under Penal Code §§ 1203.4(c)(1) and (c)(2), a judge can deny a request for expungement because DUI falls under Vehicle Code § 12810, however, Greg had never seen a judge exercise such discretion.
Greg Hill & Associates then filed the petition for dismissal for the client, including with a supplemental memorandum and a declaration from our client explaining why he wanted expungement and attaching his UCLA diploma and the Cal State Long Beach tuition assistance regulations.
The judge in the Metro Court was very tough on this request, which is unusual.  She explained how she had looked into the case facts of the DUI being a second-time, only a few years after the first DUI, the high BAC of our client, the car accident, our client getting a 14601.2 conviction while on probation and that she had read our client’s petition for dismissal, with his declaration and his exhibits.
She explained that in her discretion she decided to grant the expungement.  Greg was very relieved of this and was certain that our “overkill” motion with the client’s declaration, the supplemental points and authorities and the proper format of everything we filed made the difference.  Our client was also very happy.
For more information about expungement, please click on the following articles:
Contact us.
Serving Torrance, Long Beach, Compton, Airport Courthouses and Other Courthouses.