Our client, age 56 and with no prior criminal history, was driving home after lunch with friends at a small restaurant near U.S.C. He had consumed one Bud Light with lunch, he later told police officers.

Our client, a house painter, spoke no English at all. He had one passenger, a co-worker, with him in his truck. The client pulled out of the small strip mall parking lot to head back to work.

Police officers allegedly observed our client almost hit a pedestrian in a cross-walk after failing to yield to her. Our client then drove down the road, allegedly weaving on the road.

The police officer who stopped our client spoke no Spanish at all, but wrote a detailed report describing what our client said in response to numerous questions in English, which our client did not understand. There was no translator at the traffic stop and our client’s passenger also spoke no English.

The client then submitted to a breath alcohol test and registered a 0.08% blood alcohol content (BAC).

When the client came to our office, he was angry at the police officer for arresting him without the use of an interpreter or another Spanish-speaking officer. Our client’s passenger, our client stated, would refute the claim that a pedestrian was almost struck in a cross-walk. He also did not see anyone where the police officer claimed there was a passenger. Our client even wondered out loud to Greg if the police officer was in the restaurant, saw our client drinking and decided to wait for him to leave, just so he could stop him and then arrest him.

Greg Hill appeared at the arraignment in the Metropolitan Courthouse (1845 S. Hill St. in Downtown Los Angeles) on the client’s behalf. The client remained at work. Greg explained the odd language situation to the Los Angeles City Attorney assigned to the case. The City Attorney commented that it seemed like our client was a good guy, being 56 years old with no criminal history at all. Our client was also a U.S. citizen, hard-working and seemed credible. 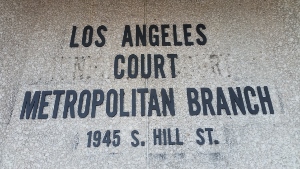 Metropolitan Courthouse in Downtown Los Angeles
The City Attorney looked over the facts on the police report and listened to Greg Hill’s description of the passenger’s role. The City Attorney then graciously agreed to drop the DUI charge and amend the complaint to allege our client drove at an excessive speed (Vehicle Code § 23109) , in exchange for being placed on summary probation for two years and payment of a $240 fine, plus penalties and assessments (a total of about $1,000, but after credit of $30 toward the base fine, he owed a total of about $875). The client did not have to enroll in or complete an alcohol awareness program of any sort.

The client was quite happy with the plea bargain, as he avoided the ignition interlock device (IID) that is associated with a conviction for DUI in Los Angeles County. Installing and using such a device in our client’s line of work, with co-workers in his truck with him, would have been embarrassing. He was also relieved not to have to enroll in and complete an alcohol awareness program for the court. He was also happy to be able to say the DUI charges were dismissed.

Postscript: at the time this case was resolved, in 2015, defendant received $30 per day in credit toward the base fine for each day in custody. When taking into consideration the effect this has on penalties and assessments that are based on the base fine, this worked out to about a $150 credit toward total fines owed per day in custody. Now, in 2019, the credit is $125 per day toward the base fine, which works out to a total saving of approximately $500 when penalties and assessments are considered.

For more information about why a wet reckless is better than a DUI and ten things to do if stopped for DUI, click on the following articles: